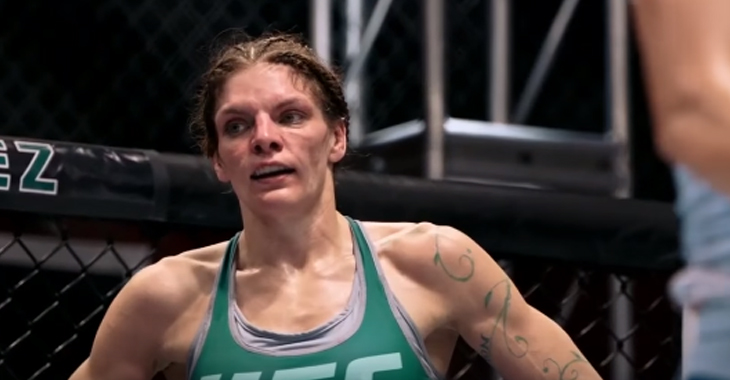 After an emotional defeat at the hands of  Nicco Montano on last week’s episode of The Ultimate Fighter 26, Lauren Murphy was very emotional. Losing is always hard, but feeling like you may have missed out on a shot in the UFC that you’ve worked years for is much harder. Nonetheless, she was expected at practice with the rest of her team the next by by her coach Eddie Alvarez. This was something that caused a huge rift between Murphy and her Alvarez, causing her to voice her frustrations about it on air.

“Eddie [Alvarez] met me super recently. He doesn’t know anything about me. I’m doing my best here and if I need two hours to process the fact that I just blew my shot at the UFC title, like give me two f-cking hours by myself to cry it out and f-cking think about it and miss my husband and miss my kid and figure out how I’m gonna’ explain to them that I f-cking blew it without somebody like correcting my boxing technique. For two f-cking hours.”

One word to explain Eddie Alvarez? Our #TUF26 girls chime in! https://t.co/dIDZxc9biQ

“I don’t think that’s asking so much, I don’t think that’s an unreasonable request the day after I just fought my f-cking ass off in the cage. So, don’t f-cking get on my ass or send out a bunch of bad energy because I didn’t go out to the gym this f-cking morning when you wanted me to. Like, I should be there immediately. I felt like I got hit by a f-cking bus this morning. F-ck.” — Lauren Murphy on The Ultimate Fighter broadcast last night.

Lauren Murphy spoke to MMA Fighting about how she was ‘envious’ of the opposing team and that they could have rest days whenever they wanted, especially after fights. Murphy’s emotions toward the disagreement were brought up all over again watching the latest episode back at home which showed her post-fight airing of grievances. She took to her own blog covering her Ultimate Fighter 26 experience and talked more about the situation with Eddie Alvarez.

“Who is bringing down morale? The woman taking a rest day, or the guy talking sh-t about her to the rest of the team while she’s not there? How do you think those other girls felt knowing that Eddie would give them the same treatment if they wanted a day off? Gah! It’s making me mad all over again just thinking about it!! Besides, I’m pretty sure Eddie didn’t go running to the gym the day after Conor McGregor knocked him out so he could help his teammates get ready for their fights. I thought the whole situation was a load of crap then, and I especially think it is now that I’ve seen the episode.” — Lauren Murphy on her official blog.