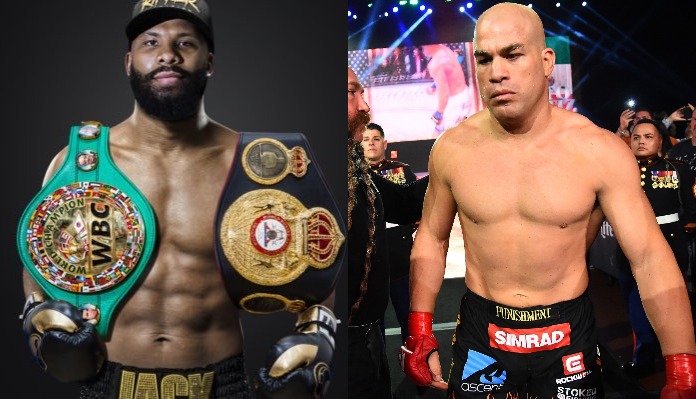 Jack is looking to return to the win column against Blake McKernan on the undercard of Mike Tyson vs. Roy Jones Jr. Although he is now set to take on a real boxer, the Swede reveals that was originally not the case as the original opponent was going to be Tito Ortiz.

“At first, they were talking about me doing an exhibition boxing match against Tito Ortiz. I was like yeah sure and Ortiz wanted too much money and he didn’t want to fight me so it was scratched,” Jack revealed on Just Scrap Radio on BJPENN.com. “Or, at least that is what I heard. It makes no sense to cut weight for an exhibition, so we then decided to find a cruiserweight and dedicated it to the charity and they found this guy.”

For Badou Jack, he says he was only interested in boxing Tito Ortiz if it was an exhibition. He says it didn’t make sense to fight him and adds that beating a retired MMA fighter for not a huge amount of money wasn’t much of interest to him.

However, Jack says he never got a contract due to the fact Ortiz priced himself out of the event.

“That was mostly just talks. He is a little older and is retired so I’m not sure what happened,” Jack explained. “I don’t follow MMA and then they said it would be a real fight. I can’t fight an MMA fighter in a boxing match. Unless it is big money. Unless it a huge name and a big money fight then it makes sense. Why would I fight an MMA guy? That is no fair.”

Badou Jack is the former WBC super-middleweight and WBA light heavyweight champion, so he would’ve likely been able to beat Ortiz with ease in boxing.

Tito Ortiz, meanwhile, has no boxing experience and last competed back in December where he submitted Alberto Del Rio. The 45-year-old is on a three-fight winning streak.

Would you have liked to see Badou Jack box Tito Ortiz on the Mike Tyson vs. Roy Jones Jr. undercard?