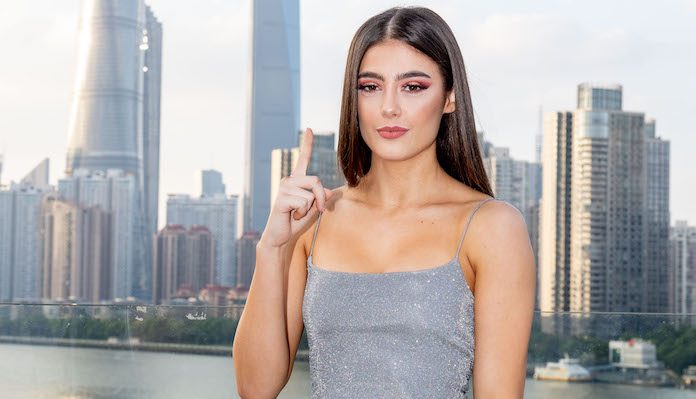 On Saturday, June 15, in the main event of ONE: Legendary Quest in shimmering Shanghai, China, 18-year-old Muay Thai star Alma Juniku will take on champion Stamp Fairtex for the ONE Atomweight Muay Thai World Title.

Ahead of this mammoth Muay Thai showdown, the Albanian-Australian talent had a quick chat with BJPenn.com’s Tom Taylor.

“I’ve been training really hard and getting my strength and fitness up, so I feel I’m pretty prepared for this fight,” she said shortly after the official pre-fight press conference.

This bout will mark the WBC Muay Thai World Champion’s first bout under the ONE Championship banner. She says she’s honored and excited to be fighting for a title so soon into her time with the Singapore-based martial arts organization.

“It’s not the first time I’ve been going for a title and fighting in the main event, but I’m really, really excited and thankful that I’m fighting for the belt [in my ONE debut],” she said. “It would mean the world to me to win this title because it would really boost my career. It’d be such a huge accomplishment.”

Swiping the title from the ferocious and physical Stamp Fairtex, of course, is not going to be easy for the young Alma Juniku. Yet she feels well-prepared to the task at hand, and is hopeful that her aggression and tenacity will carry her to victory.

“My plan is to be relentless, push forward and just be aggressive and non-stop,” she explained.

If Juniku does defeat Stamp Fairtex in Shanghai, Stamp will still be able to call herself a ONE Championship titleholder, as she’s also the owner of the ONE Atomweight Kickboxing World Title. Juniku is reluctant to commit to fighting Fairtex for that belt too, but certainly wouldn’t turn down the opportunity if it was offered down the road.

“I’m not sure. If I got offered the opportunity, I definitely wouldn’t say no,” she said.

The talented Aussie is also giving some though to potentially transitioning into MMA in the future, although she recognizes doing so what not be easy.

“I don’t know if I’ll transition into MMA, it’s a new sport that I’d have to learn,” she said. “It’s something that I’m definitely thinking about though.”

While the possibilities are endless for Alma Juniku in the future, her priority is wresting the belt from the waist of Stamp Fairtex this weekend in Shanghai, and hanging onto it for as long as possible.

“I know a lot of people are doubting me, but I push forward, and I bring a good fight every time,” she said confidently. “I hope to do really well in ONE Championship. I hope to become the champion and remain the champion also.”