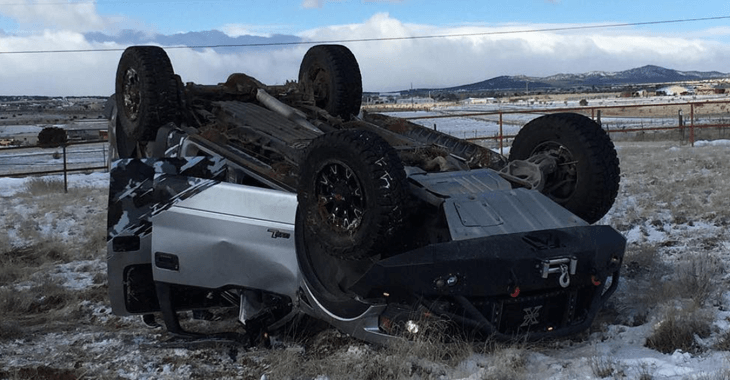 It looks like UFC veteran Donald “Cowboy” Cerrone has been involved in a horrendous car accident.

The always game fan favorite is scheduled to move up to welterweight and face Tim Means on February 21st at UFC Fight Night 83 in Pittsburgh, Pennsylvania. Cerrone posted photos recently to social media of a severely wrecked truck. Obviously, if Cerrone was able to post to his social media, he was not seriously hurt.

Cerrone posted this photo to Instagram and said, “Coming in HOT 😂😂😂😂😂.”

It sounds like the truck wreck may have been a good time? Cerrone also retweeted a post of a photo of the wrecked truck with the caption saying, “I can’t believe @Cowboycerrone did this to my dads old truck in one weekend”

I can't believe @Cowboycerrone did this to my dads old truck in one weekend pic.twitter.com/D6SeocjXjf

It seems like “Cowboy” is always in for a wild ride.

Did you know that “Cowboy” Cerrone is missing half of his stomach and a few feet of his intestines from an old ATV accident?

“I was racing some motocross and I wrecked real bad and just kind of spilled my guts out,” Cerrone said in an old interview with Sherdog. “They had to take a bunch of my intestines and part of my stomach.”

Perhaps Sage Northcutt may not be so quick to take up Cerrone’s offer to be shown “how to live.”

From the tone of his social media posts, “Cowboy” seems to be doing fine and it doesn’t sound like he is worried about any injuries from the accident. Good news for Tim Means as the fight is coming just a few weeks away.

How do you think Donald “Cowboy” Cerrone will do in his move up from lightweight to welterweight? Will he be able to bounce back from his loss to Rafael dos Anjos? Share your thoughts on how you see the fight going for Cerrone and Means in the comments!