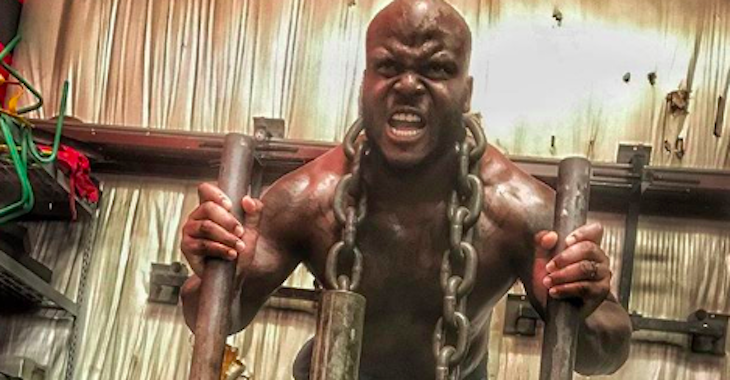 UFC heavyweight standout Derrick Lewis was forced to pull out of his highly anticipated fight with Fabricio Werdum just minutes prior to tonight’s UFC 216 event in Las Vegas.

“The Black Beast” apparently aggravated a previous back injury and is not barely able to move.

Spoke to Derrick Lewis via text.

"I can't move," Lewis wrote. "I’m feeling the same pain in my back that I felt before the Mark Hunt fight."

Dealing with two bulging discs. His team tells me he tried his best to fight through it. He's devastated. More coming to @MMAFighting.

“I can’t move,” Lewis wrote. “I’m feeling the same pain in my back that I felt before the Mark Hunt fight.”

Helwani added that Lewis is dealing with two bulging discs. His team said he tried his best to fight through it and that he’s devastated.

The heavyweight scrap was expected to be featured on tonight’s UFC 216 pay-per-view main card.

Fabricio Werdum holds a 21-7-1 professional mixed martial arts record and last fought Alistair Overeem in July at UFC 213 where he lost a majority decision, going 1-2 in his last three bouts. In September of last year at UFC 203, “Vai Cavalo” picked up a unanimous decision win over Travis Browne. Werdum lost the UFC heavyweight title to Stipe Miocic in his prior bout at UFC 198 in May, losing by KO.

Derrick Lewis holds an 18-5-1 professional mixed martial arts record and last fought Mark Hunt in June where he lost by TKO in the fourth round and shortly pondered the idea of retiring. Prior to his bout with Hunt, “The Black Beast” was a roll in the UFC heavyweight division riding a six-fight winning streak with his previous loss being back in 2015 against Shawn Jordan. In his six-fight winning streak, Lewis picked up notable wins over Gabriel Gonzaga, Roy Nelson, and Travis Browne.