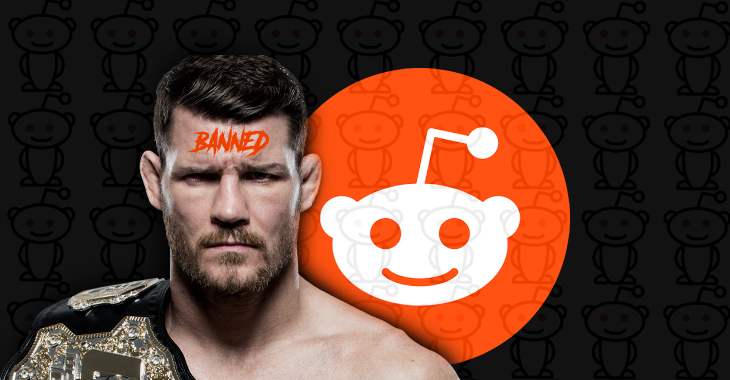 Michael Bisping has been known to ruffle feathers wherever he goes. Ol’ Left Hook Larry always says what’s on his mind, whether it offends you or not usually is of no concern. However, it wasn’t bad behavior that got Bisping banned from Reddit. Matter of fact, it just a misunderstanding due to so many nefarious fiends looking to pose as someone they are not online. What made it so funny, is that the MMA subreddit wanted Bisping to get his son (and frequent R/MMA contributor) to verify his father’s identity. Needless to say, Bisping didn’t really want to have to give his son Callum the authority and vowed to talk about this on the next episode of his show. …And he did.

“I was looking for something to read and I thought, I’ll go to Redidt. I went to Reddit and you got to sign up, so I put in my username — I think it was mikethecountbisping — and I started enjoying Reddit. There’s lots of topics on there and I was like, this isn’t bad actually. Then when I went back, I had some private messages: ‘You have been banned from Reddit. Parody accounts are not allowed.’ They just assumed I was not Michael Bisping and banned me from Reddit. I messaged them back like, oh my god, are you serious? I am Michael Bisping. Now, I feel like a d-ckhead going hey, I am Michael Bisping, but I’m just trying to get un-banned from Reddit. Then they say — this is the kicker — ‘Well, if you are Michael Bisping, get your son to send us a message. We know him.'” — Michael Bisping on his Believe You Me podcast.

If the story from Michael Bisping (if that really is you) wasn’t hilarious enough, the moderator of R/MMA actually made a statement about it and provided screenshots of he and Bisping’s private message exchange. There’s no hyperbole to be found in the account the UFC middleweight champion gave on his podcast, this is how it really went down. Check out the moderator’s confirmation and his full conversation with Michael Bisping below.

“Alright – here’s the story. I saw the account pop up and sent him our standard “please verify if you are indeed Fighter X.” He never responded to my PM after 24 hrs or so – I banned him as per our protocol. We send these messages and 99% of the time the user either goes silent or deletes their account. We see parody accounts all the time. Of course the one time it’s not a parody account, it’s the Count. He then responded to the ban message. Here’s the full conversation. At the end we were apologetic and I also apologized to Callum [Bisping] as well. Honestly, I wouldn’t have done it any differently. We know Callum and who else to best verify Mike Bisping? We followed our system. I’m glad Mike got a laugh out of it and hope he continues to come around.” — Moderator of R/MMA Buzznights.