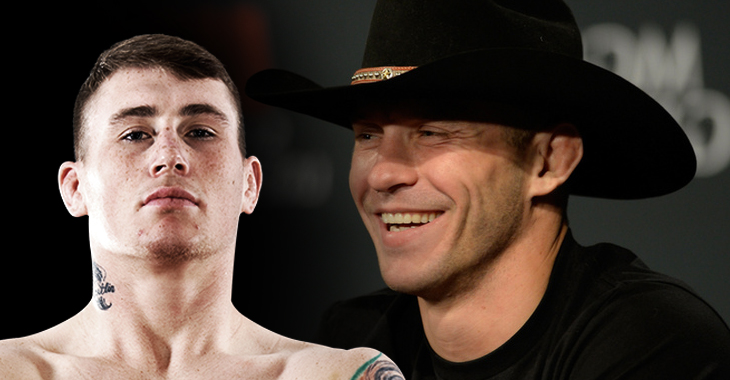 When Darren Till got word that Donald “Cowboy” Cerrone had no idea who he was, Till didn’t bat an eyelash. He didn’t feel any disrespect and promises he’ll know him after their fight at UFC Gdansk. However, when former UFC heavyweight Brendan Schaub said that Cerrone should be more selective of who he picks to fight, that caught Till’s attention. He recently went on the air to weigh-in on Schaub’s comments.

“You’ve got people like Brendan Schaub saying he doesn’t know me, he’s disrespecting me and whatever, saying ‘Cowboy’ [Donald Cerrone] shouldn’t be taking this fight, but why shouldn’t I be taking the fight? Let’s get it straight, I’m unbeaten here. I’m unbeaten. Nobody’s been able to beat me. So, what do I do? Do I just stay on the prelims, do I? Fighting no one. Can’t I move up? Is this what the world’s come to? I can’t move up? I can’t fight these big guys? Is this what it is? A big gap? I’ll f-ckin’ show them what’s going to be a big gap on fight night when I crack him on the chin.”

“Listen, I don’t care what people say, I don’t care about social media. None of that gets to me. I do look at it, and I do laugh. I just don’t give a sh-t what anyone says. I really don’t. […] They offered me the fight, I said yes. I’m going in to fight and I’ll be going in to take his chin clean, clean off. So, you know, let these people talk, let Brendan Schaub go on his podcast and talk. Hasn’t he got better things to talk about? He should be worrying about the f-ckin’ 10 knockouts he’s had in his career.” — Darren Till on the “Obviously Fight Talk” podcast.

Let there be no mistake, Darren Till is going to say whatever is on his mind. He throttles forward and never stops, just like his fighting style. Aside from a draw against Nicholas Dalby, Darren Till is on a monstrous 15-fight win streak and has never lost since his career started in 2013. It’s a streak he’ll look to continue at UFC Fight Night 118 against his biggest test yet. No matter what, he’ll make sure everyone knows this scouse’s name come October. Listen to his entire, profanity-laced interview on the Irish-based podcast below. It’s good craic.