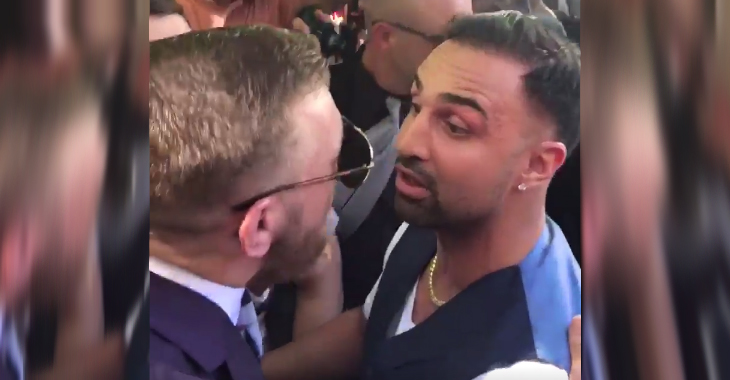 Just when the dust started to settle between UFC lightweight champion Conor McGregor and former boxing champion Paulie Malignaggi, bookies have brought up the two former sparring partners names up again for a fight.

Malignaggi had previously called McGregor out to a boxing match when there was just talk of the UFC lightweight champion fighting the undefeated Mayweather. Interestingly, McGregor called upon Malignaggi to join his camp as a sparring partner to help him train for Mayweather when the fight was made official. Although it seems there may have been some ill intentions on McGregor’s side from the start, Malignaggi obliged and made his way to Las Vegas for McGregor’s U.S. leg of his training camp.

McGregor and Malignaggi had an intense first spar where things allegedly got a bit dirty. Things got even more intense after their second sparring session where some members of McGregor’s camp released photos with Malignaggi coming up off his back from the canvas where it appeared that the former boxing champion was knocked down by McGregor. This led to Malignaggi leaving the camp in disgust after going in with good intentions to help “The Notorious” train for his fight with Mayweather. Dana White then released an edited clip of the knockdown/push down and different people will still give you different opinions on if it really was a knockdown or a push down.

Since then Malignaggi has been pushing for a fight with the current UFC lightweight champion.

OddsShark recently highlighted that Bovada released odds for the potential boxing match between McGregor and Malignaggi with Malignaggi being the favorite. When odds were released in August, Malignaggi was favored at -225 while McGregor was a slight underdog at +175. Bovada’s lines have since moved a bit with Malignaggi at -150 and McGregor at +120, as of this writing.

Think that we will see Conor McGregor return to the sport of boxing and will end up fighting Paulie Malignaggi? Let’s discuss this and the odds for the fight in the comment section!