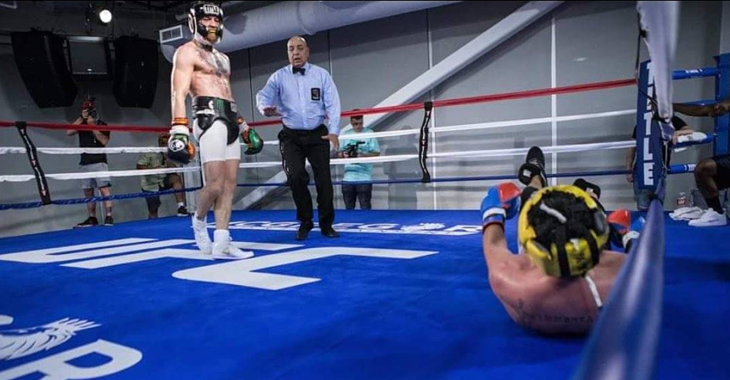 It somehow seems like ages ago since Conor McGregor was screaming into the faces of everyone that he owned boxing. Just a handful of months ago, McGregor did the unthinkable and actually fought Floyd Mayweather in a boxing match. Both of them made an obscene amount of money and walked away from the ring to enjoy it all. The UFC’s self-proclaimed ‘Champ Champ’ did a lot of his training at the UFC’s Performance Institute in a ring emblazoned with the UFC and his own logo for McGregor Sports and Entertainment. However, today that ring sports new logo.

The boxing ring is mine. pic.twitter.com/4lMwOXtPhT

The canvas has been changed to ZUFFA Boxing. In what seems to be a simple logo swap opens up a conversational can of worms and a lot of questions. What started as just something mentioned in passing and a shirt that looked like it was only made for Dana White to wear during the build-up to Mayweather/McGregor, suddenly is something more. This also straight on the heels of Floyd Mayweather in talks to make his UFC debut, before rumors were quickly crushed. There is no telling what ZUFFA Boxing could be or what it will mean for the UFC in general, but things are definitely becoming more serious.