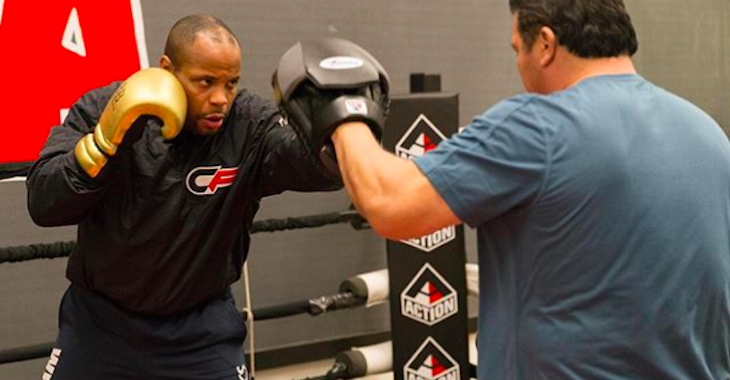 Daniel Cormier addressed this possibility at the UFC 220 post-fight press conference. Apparently, it’s not something he’s keen on.

”People have talked about that for a really long time,” Cormier said (h/t MMAFighting). “I did 13 fights at heavyweight and I hate cutting weight, as you guys all know. I’m the only guy who gets a rousing ovation every time he steps on the scale to make weight.”

”I haven’t really thought about it,” he continued. “It’s hard for me now because Cain [Velasquez] is in the gym more. Cain is in the gym getting back prepared to do what he does best. I draw so much from him. Cain had a baby about a month ago and he’s here with me now. I didn’t know if he was coming to the fight. I didn’t bother to ask him if he was coming to the fight because I didn’t know if it was possible because of the new baby.”

”He was there for my weight cut. The dude’s never sauna’d, and he was dried up like a California raisin by the time we were done with that sauna. But he’s there. I draw inspiration for him. If he’s getting prepared to get that [heavyweight] belt back [from Miocic], then I have nothing for that division. That’ll never change.”

Cormier then gave a quick assessment of a potential fight between Cain Velasquez and Stipe Miocic.

”It’s he [Miocic] and Cain, and then everybody else,” Cormier said. “The biggest heavyweight fight we’ll ever have is when those two fight each other. I’ll never say he’s better than Cain Velasquez, but he’s good. He’s just as good. They’re even.”

Would you like to see Daniel Cormier fight at heavyweight again?