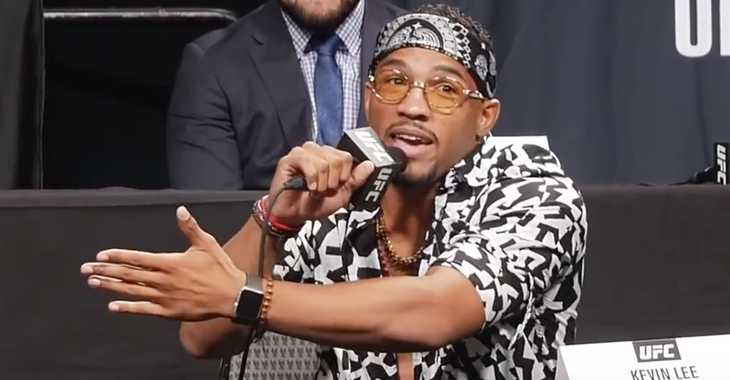 On April 7, at UFC 223, interim lightweight champion Tony Ferguson and undefeated contender Khabib Nurmagomedov will battle for a lightweight title. Will it be the interim title currently owned by Ferguson, or the undisputed title currently owned by Conor McGregor? Dana White was incredibly unclear when asked about this at a press conference in Boston, refusing to say whether the UFC will strip McGregor of his undisputed title, but also assuring the winner of this Ferguson-Nurmagomedov fight will be the champion…

Whatever the case ‘The Motown Phenom” Kevin Lee expects Tony Ferguson to be the man who comes out on top – against Nurmagomedov and McGregor.

“Khabib’s the number one contender, and Conor’s sitting on the outside for that” Lee said on the latest episode of BJ Penn Radio. “I don’t know. I like that [Ferguson vs. Nurmagomedov] fight. I think that fight’s a lot more interesting than people give it credit for. I don’t know. I think Tony will be better all around, and be able to wear down on Khabib, and then he’ll go out there, he’ll beat the hell out of Conor, and I think I’m [going to] squeeze my way up in there one way or another.”

While Lee is hoping work his way into the McGregor-Ferguson-Nurmagomedov fracas, he’s content to sit back and watch the madness unfold in the meantime.

“It’s going to be interesting,” he said. “That’s why I’ve been sitting back, trying to see how this whole thing shakes out, and get in where I do. Yeah, right now, like I said, I’m sitting on it. I’m getting a lot of different looks, changing up a lot of stuff. We’ll see where it’s going to land. We’ll see where it’s going. I don’t know. I’m looking to those three. Those are the big three. Ferguson right now is the one that I’m really gunning for, and I realize that it’s a good three wins away from that, but we going to see.”

What do you think of Kevin Lee’s assessment of the lightweight title situation?