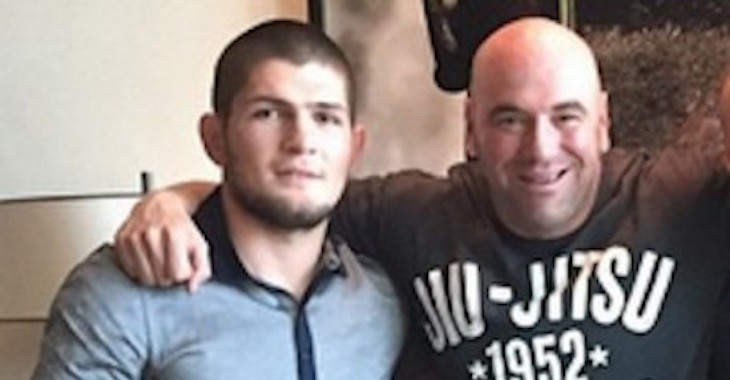 After being forced to withdraw from last night’s UFC 209 event in Las Vegas, UFC president Dana White is unsure what the future holds for undefeated Russian Khabib Nurmagomedov.

“The Eagle” was supposed to square off with fellow top contender Tony Ferguson for the promotions interim lightweight title at yesterday’s event, however a bad weight cut forced the AKA product out of the highly anticipated fight.

On Friday morning, just hours before the scheduled UFC 209 weigh-ins, Nurmagomedov was admitted to a local Las Vegas hospital after suffering sharp pains in the area of his kidneys and liver.

Shortly after that, the fight with Tony Ferguson was cancelled. “To be honest with you, Khabib fought (at UFC 205) in New York in November then here in this fight,” White said. “Two back-to-back weight cuts like that. I don’t know if he can make the weight or if he needs to get a better plan (or) dietician. Something.”

“I don’t know (what he should do). He got within six pounds and was in really rough shape. He’s going to have to take some time to recover from this weight cut, and then I don’t know what to do.”

Dana White finished by saying that he expects it will take some time for Khabib Nurmagomedov to recover from the botched weight cut that left him hospitalized.

“He was having pains either where your kidneys are or your liver or something – I don’t know the exact specifics, but he was having pains,” White said. “He looked terrible. I don’t think there was any real damage done to it. When I say damage, I mean longterm. It’s going to take him a little while to recover from this weight cut.”

Do you think we will see Khabib Nurmagomedov fight at lightweight again? Sound off PENN Nation!