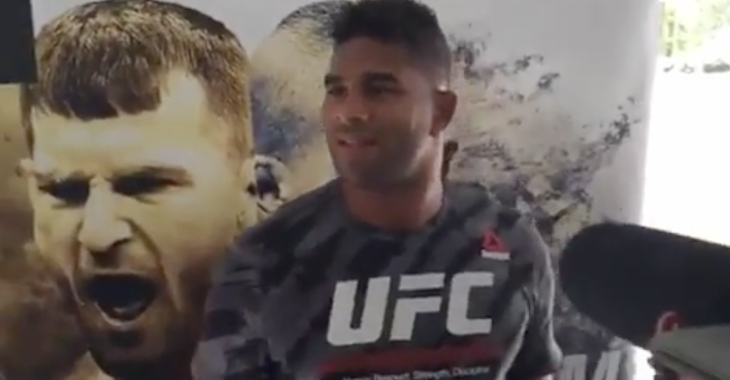 Last night, in the first bout of the UFC 209 main card, former Strikeforce, Dream and K-1 champ Alistair Overeem separated himself from a failed UFC heavyweight title shot against Stipe Miocic by dominating Mark Hunt to a crushing, third-round knockout. He earned this knockout with a beautifully timed knee and several followup punches.

“I am very proud, but I am also very proud of my team,” Overeem said of his performance against Hunt (via Sherdog.com). This is a great group of guys surrounding me and we might be old, but we’re not done yet. We see a lot of things [when we watch film], we studied my opponent very extensively, all my coaches do, and I think that combined with my ability, technical ability, athletic ability, I’m able to put these guys away.”

In the wake of this win, Overeem put on his matchmaking hat and outlined some of the opponents he’d be interested in next. While another shot at the title is obviously his preference, he said he’s also interested in fights with streaking contenders Francis Ngannou and Derrick Lewis.

When we last saw Francis Ngannou in action, he knocked out former champ Andrei Arlovski to earn the number-six spot in the heavyweight rankings. Lewis, meanwhile, last fought in mid-February, when he took out Travis Browne with a second-round KO.

Who do you want to see Alistair Overeem fight after his dominant knockout win over the ever durable Mark Hunt? Sound off, PENN Nation!