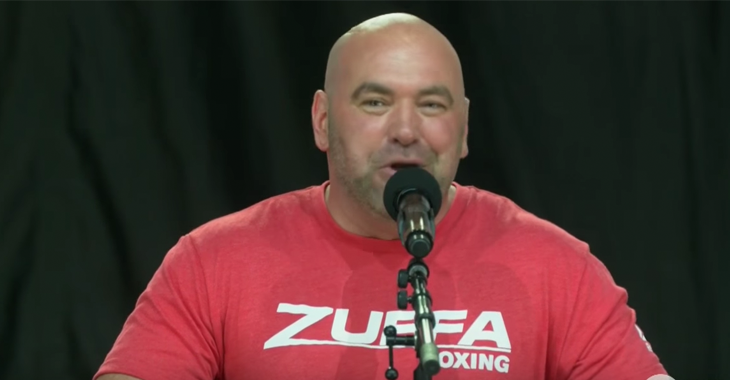 UFC President Dana White is currently in the process of getting his boxing promoter’s license.

Speaking on Tuesday in Santa Monica at the extension of Freddie Roach’s infamous Wild Card Boxing Club at the Wild Card West boxing club, White told Lance Pugmire of the LA Times that he is “getting into boxing, 100 percent.”

White, who wore a Zuffa boxing shirt during some of the promotional events building up the Mayweather vs McGregor fight isn’t stepping away from the UFC. White is just adding boxing to what the new owners of the UFC are doing.

“No, no, no, I’m not leaving the UFC. I’m getting into boxing with [WME/IMG head] Ari [Emanuel] and the UFC will be doing boxing, too,” White said.

“It’s still early. We’re still working on it. I’ve got to get my [stuff] together, but I’m getting into boxing, man. It’s coming.”

White has a background in boxing as that was his passion when he was younger. White boxed and taught boxing classes as a job before convincing the Fertitta brothers to purchase the UFC in 2001.

“It’s harder than saying we’re getting into boxing. We still have to get some homework done. I feel like I can do it better than everyone else. I love the sport,” said White.

With his track record of being a key individual in flipping the UFC from the $2 million purchase in 2001 to the $4.025 billion sale in 2016, White has helped to progress the sport of mixed martial arts in immeasurable ways. So, it wouldn’t be hard to imagine what kind of success the outspoken UFC President can have in the sport of boxing.

“If you look at what we’ve done over the last 15 years, we’re not afraid to try new things.”