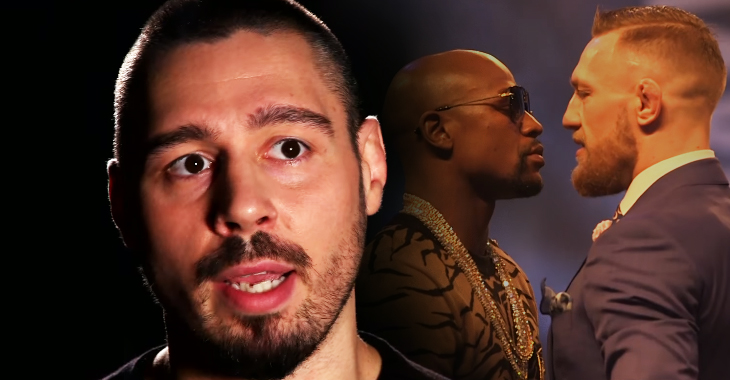 It’s hard to imagine Dan Hardy without some sort of multi-screen set-up at his home like Batman, watching 20 different fights on tons of monitors while taking notes. MMA fighters trying to diversify their skills as analysts is prevalent now, but Hardy is one of the best. Yesterday, it was announced that Hardy would join the Mayweather vs. McGregor commentary team. Today, he’s already proved his worth by releasing the first entry into a “fight diary” series to add insight to the unprecedented boxing match.

It’s no secret that Conor McGregor won’t be lobbing his deadly sniper left hand at Floyd Mayweather while wearing small MMA gloves. Matter of fact, one of the reasons that Mayweather wanted the fight contested at 154lbs is that it would force McGregor into 10oz gloves. Dan Hardy wrote for Sky Sports on why that matters.

“The biggest impact is on Floyd Mayweather’s defense. The 10oz boxing gloves are more of a defensive shield. In MMA you can be punched straight through your guard because the gloves are so small. In boxing, Floyd can use his lead shoulder to cover one side of his face and his glove to cover the other side. You can’t do that in MMA, so Floyd has an advantage with the bigger gloves.” Another great point Hardy makes is how the gloves further complicate things. You can’t make a completely tight fist in big boxing gloves like you can with MMA gloves. Mayweather’s hands have been broken before and have been a constant problem, which is why he attributes Rafael Garcia for saving his career. This same problem could injure McGregor’s prized money-makers, but Hardy thinks all the work with 4oz gloves will save him.

“MMA gloves are designed to protect the fighter’s hands – the padding is stripped back to give us the freedom to grip. That changes how you throw a punch, and how a punch penetrates the guard. Gloves will change the position of your hands. A 10oz glove doesn’t let you close your fist – this is partly why Floyd has so much trouble with his hands. He isn’t making a proper fist, and his hands are not conditioned. I conditioned myself to punch without a glove and Conor comes from the same school of thought. Floyd has trained his whole life in gloves that do not encourage the correct hand position.”

This Mayweather and McGregor circus created MMA experts out of boxers, as well as boxing scholars out of UFC fans, but Dan Hardy shows he’s a perfect choice to walk the tight rope in between two worlds and help both sides deal with a clashing of very different sports.