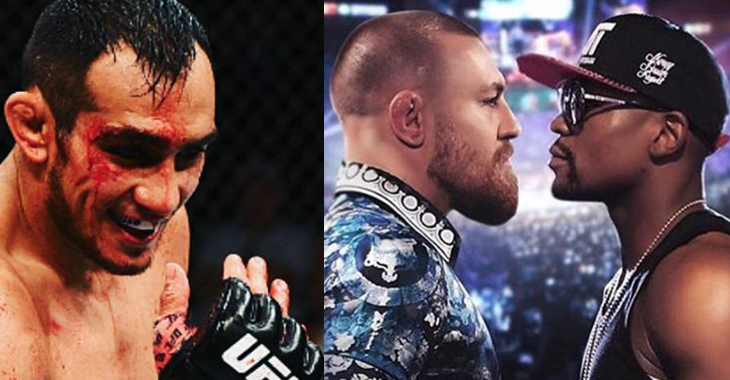 The #1 UFC ranked lightweight Khabib Nurmagomedov and #2 ranked Tony Ferguson are set to meet in the Octagon for the interim UFC lightweight belt at UFC 209 on March 4. However, the future of a lightweight title unification bout is hazy as Conor McGregor currently holds the undisputed lightweight title and is taking time off from fighting for the birth of his first child.

Ferguson feels that “The Notorious” is just trying to slip away from defending his title. With McGregor most recently stating at his pay-per-view interview that he only has Floyd Mayweather in his sights for his next bout, Ferguson may be right. “The Notorious” predicted that the fight with Mayweather will come together toward the end of this year or early next year, which would mean it could be quite some time before we see “The Notorious” back in the Octagon if a bout with Mayweather is truly his next fight.

Ferguson scoffed at the Mayweather vs. McGregor matchup while speaking with Submission Radio and says that “The Notorious” has no chance against the retired, undefeated boxing legend.

“Mayweather is gonna knock his ass out. Mayweather’s too much for him and he already knows that s**t too and the rest of the boxing world knows that,” Ferguson said (transcribed by MMA Fighting). “I know who to put my money on in that one. But the real fight that everyone wants to see – and who doesn’t know who to put their money on – would be the McGregor/Ferguson fight. Why? Cause I’m gonna smash that fool. I’m gonna submit him. You already saw him being submitted. That dude tapped before he even got the choke locked in. So I don’t know, man. I don’t even know if I would want to waste my time on that kind of dude. He doesn’t meet my fight standards. The only dude right now that meets it is Khabib.”

Who you got in the interim UFC lightweight title fight between Khabib Nurmagomedov and Tony Ferguson? Give us your pick in the comment section!