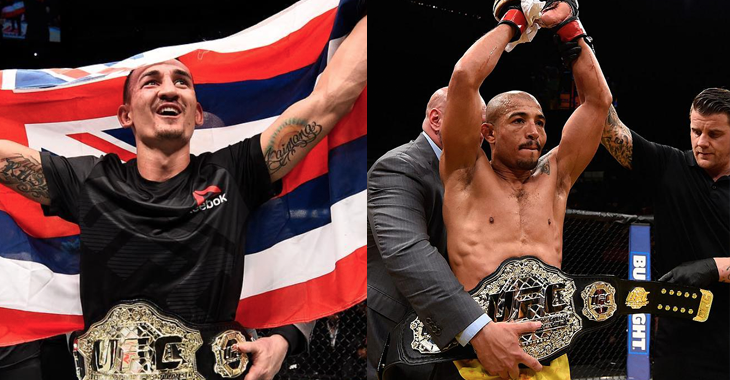 It sounds like Max Holloway no longer has to look for Jose Aldo.

ESPN’s Brett Okamoto tweeted on Friday that he spoke with Dana White and the UFC President told him that Jose Aldo vs. Max Holloway is set.

Okamoto tweeted, “Just taped 5ive Rounds with guest @danawhite. He told me Aldo vs. Holloway is a done deal … but couldn’t remember the date.”

Just taped 5ive Rounds with guest @danawhite. He told me Aldo vs. Holloway is a done deal … but couldn't remember the date.

Jose Aldo last fought Frankie Edgar in July of 2016 where he won the interim UFC featherweight title. With Conor McGregor beating Eddie Alvarez at UFC 205 to become the first simultaneous two-division champion, “The Notorious” was forced to relinquish a title a couple of weeks after picking up the second title. Aldo was then promoted to the undisputed featherweight champion.

Max Holloway last fought in an interim UFC featherweight title fight against former UFC lightweight champion Anthony Pettis at UFC 206. Holloway became the first fighter to stop Pettis, winning by TKO in the third round. Following the biggest win of his career, the Hawaiian started his #WheresJoseWaldo campaign to unify the featherweight belts.

Now it seems to be a done deal. However, we will have to wait to hear from Dana White and the UFC on when the fight will actually take place.

Who you got in the featherweight unification bout between Jose Aldo and Max Holloway? Sound off in the comments!