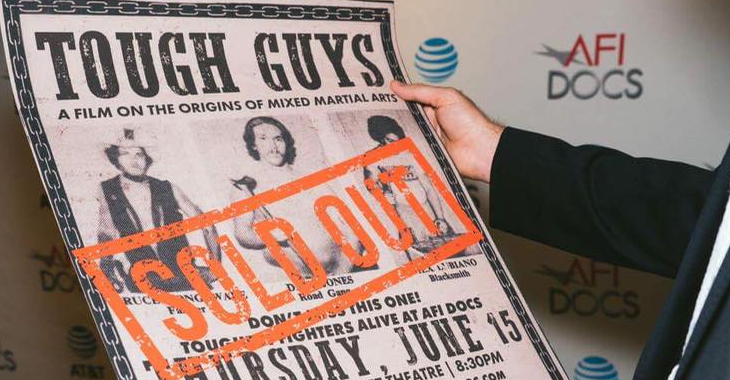 MMA has experienced a growth over the years that has been meteoric. The sport reached such a fever pitch, that the UFC was able to sell for over $4 billion. Whether you are new or even an old fan, it’s hard to believe mixed martial arts once struggled to try and get on pay-per-view. The UFC started in 1993 and the media was quick to hold up fingers in the shapes of crosses and declare the brutal bloodsport an exercise in barbarism.

Back in the 90’s, MMA was banned in many places and states, which resulted in unsanctioned fights happening underground. MMA wasn’t even legal in New York until 2016. Yet, way before that and even 10 years before the UFC’s first event, two guys named Bill Viola and Frank Caliguri were trying to make MMA happen. You’ll finally be able to hear their story in a new documentary coming to Showtime.

@JESnowden deal is done. #toughguys coming to showtime riding the momentum of #maymac new edition of my book to coincide. #godfathersofmma pic.twitter.com/PLhBDJ3yeE

“We are going to take it as far as we legally can.” – Frank Caliguri, (News Dispatch March 15, 1980)#ToughGuysDochttps://t.co/a4uULomWyQ pic.twitter.com/73hBzjmOUY

“If nice guys finish last, then tough guys almost always come out on top. Renowned local martial arts instructors Frank Caliguri and Bill Viola already believed that, and after more than 35 years, their work came to fruition with the June premiere of the feature-length documentary “Tough Guys” at the 2017 AFI Docs Film Festival last month in Washington, D.C. The film details the early days of mixed martial arts, which Caliguri and Viola created in the late 1970s. Then known as “Tough Guy Championships,” the first competition took place in March 1980 in New Kensington.” — Bill Viola Jr. via Tough Guys’ official website.

It’s incredible to look back after Conor McGregor boxed Floyd Mayweather and see how far MMA has come. It has made the journey from being exiled and pushed into the far reaches of society, to its biggest star stepping into the boxing ring against the best boxer of our generation. This documentary will be a must-see for any combat sports fan and it will air Friday, September 15th at 9PM EST on Showtime.

Here’s the official synopsis via IMDB:

“Ten years before the debut of the Ultimate Fighting Championship, two karate promoters and their fighters, a rough group of barroom brawlers, bikers, teachers and steel workers, pioneered the first mixed-martial arts league in the nation.”