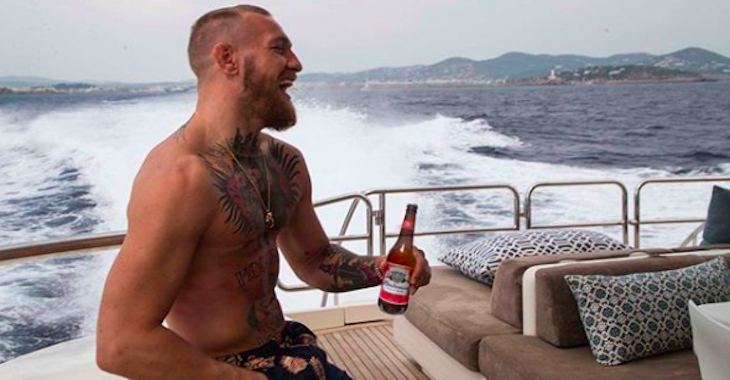 UFC lightweight champion Conor McGregor – inarguably the biggest star MMA has ever produced – has recently been getting into all kinds of trouble outside the cage. One day, he’s getting physical with a referee. The next, it seems he’s punching an associate of the Irish cartel.

Needless to say, the Irish star seems to be going off the rails a bit, and it has all cast a shadow over his fighting future.

While UFC commentator Joe Rogan is as unsure as anyone about McGregor’s future, he now feels that McGregor is at least making things interesting for those who follow his career.

“I’ll tell you one thing, he makes things fun,” Rogan continued. “He does. He makes things fun, with Oscar De La Hoya hitting the heavy bag on him. He should say he’ll fight Oscar De La Hoya but only if Oscar agrees to wear a skirt. ‘You’ve got to wear a skirt and you’ve got to wear fishnet stockings and I’ll f**king fight you.’”

Jokes aside, Rogan then shared his pick for McGregor’s next fight, should he return to the cage.

“I think Tony Ferguson is the right move as far as for the fans,” he said. “The real smart move would be fight an MMA fight and then fight a boxing match in a year. . . The Nate Diaz fight, although it could be huge, Nate’s not really fighting anybody right now. What I would like is Nate comes back and fights somebody and wins, Conor fights someone and wins, Conor fights a boxing match, they have a HUGE MMA fight after that! F**KING HUGE, GOD DAMN IT! Three million pay-per-view buys huge.”

What do you think of Conor McGregor’s recent indiscretions outside the cage?