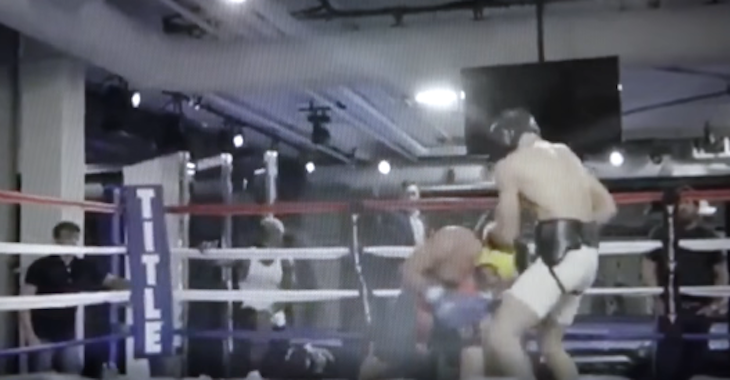 The fight that could break all the records and be the richest fight in all of combat sports is less than two weeks away as Floyd Mayweather and Conor McGregor are busy preparing for their mega-money fight.

With the news of the Nevada Athletic Commission approving the glove size going down to 8 ounces instead of their standard rule of 10-ounce gloves for the 154-pound bout, more fuel was added to the fire hyping up the bout. Although big news for the fight, perhaps the biggest hype surrounding the fight is coming from the two sparring sessions between Conor McGregor and Paulie Malignaggi.

Late Friday, Dana White released footage of the Malignaggi either getting knocked down or pushed down by McGregor. Many were quick to call it knockdown while Malignaggi and others pointed out why they consider it a push down. MMA Fighting spoke with Tom Taylor, a licensed California State Athletic Commission (CSAC) boxing referee and judge to give his analysis of the video clip and gave some interesting insight.

“I can’t tell you how I would have scored it live,” Taylor said. “I may have called it a knockdown, because the last thing to land was a short right hand to the side of Paulie’s head. That could still constitute a knockdown.

“It’s a judgment call and I think it could go either way. I wouldn’t argue it either way if a referee said it was a knockdown or no knockdown.”

Taylor went on to say that viewing it in real time, it certainly looks like a knockdown. However, when slowing the footage down, he does back Malignaggi’s reasoning for it being a push down.

“Live, it looked like a knockdown,” Taylor said. “The first time I looked at the video — that quick six, seven seconds — it looked like a knockdown. But when you slow it down, you can see how he has him held down behind his neck, behind his head. Paulie pulls up and [McGregor] lets go, [Malignaggi’s] momentum is taking him. And then there’s that short little right hand that lands.

“So it would definitely be a judgment call right then and there. But looking at this video, I would say no knockdown.”

Taylor says that it would be all on the referee’s call and their angle of viewing the incident. Referee Joe Cortez is seen in the video but has not commented on the incident, which Malignaggi said is due to McGregor’s camp now allowing him to do so. However, Taylor gave his analysis of Cortez’s reaction from the sparring clip.

“If you listen to his voice, he goes, ‘Whoa, whoa!’” Taylor said of Cortez. “To me, that means he was gonna call it a no knockdown, in my opinion. ‘Whoa, whoa’ as a referee means, ‘Oh, whoa, whoa, I see something that wasn’t right.’ Holding a guy’s head down: ‘Whoa, whoa, whoa, stop.’ Something like that and Paulie is already down. To me, it looked like Joe was going to call that a no knockdown.” There is one boxing referee’s breakdown of the knockdown, or push down. What are your thoughts on referee Tom Taylor’s analysis? Let’s discuss this in the comment section.