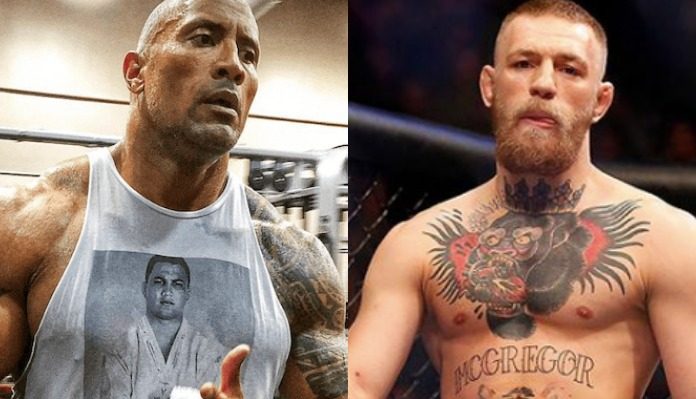 Dwayne “The Rock” Johnson is a big Conor McGregor fan. That’s been clear for quite some time. Yet after watching the documentary Conor McGregor: Notorious, which celebrates McGregor’s many massive accomplishments, The Rock’s admiration for the Irish fighter seems to have ballooned even bigger.

“Saturday night doc viewing,” The Rock said in his Instagram post. “[Conor McGregor’s] NOTORIOUS. Great insight into the DNA of this successful and smart business man. Best part of his success, is when you strip it all away – it will always come down to being the hardest worker in the room. Those roots never go away. Solid doc. Well done brother.”

Unsurprisingly, McGregor promptly responded to these mammoth compliments from The Rock, offering respect in kind.

“Thank you Rock,” McGregor said in a repost on Instagram. “Your work ethic is inspiring to me and I appreciate these words very much! Big respect my Uce.”

McGregor has not fought since his August 2017 boxing showdown with undefeated legend Floyd Mayweather Jr. His most recent mixed martial arts bout occurred in November of 2016, when he knocked out Eddie Alvarez to capture the UFC lightweight title. Because he still owned the UFC featherweight title at the time, this made McGregor the first fighter in UFC history to own titles in two weight classes concurrently. Regrettably, McGregor has since been stripped of both titles on the basis of his inactivity.

At present, it’s not known when — or even if — Conor McGregor will return to the cage. That being said, he remains the biggest star in mixed martial arts, and is frequently named as a potential opponent for new UFC lightweight champion Khabib Nurmagomedov.

What do you think of this exchange between Conor McGregor and The Rock?