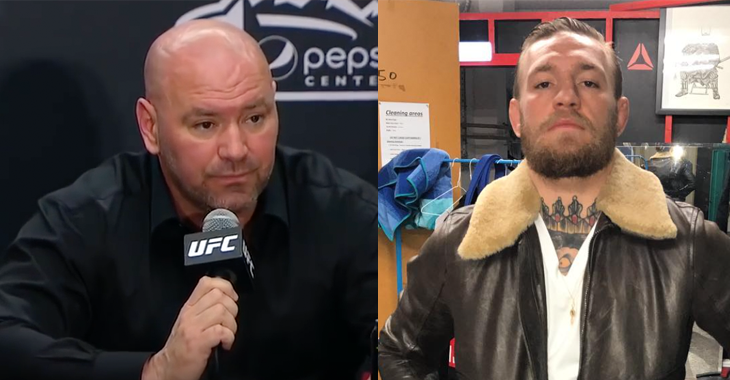 With talks of a potential Conor McGregor vs. Floyd Mayweather scrap currently dominating MMA headlines, it came as quite a shock recently when prior to a pay-per view interview, McGregor released a photo on social media in which he said “fuck the UFC”:

I'm so made! Heading to do a Q and A in front of 5000 fans! You read that right. That's more than UFC attendance tonight. And it's on PPV at http://www.notoriouslive.co Fuck the UFC. Fuck Floyd. Fuck boxing. Fuck the WWE. Fuck Hollywood. And fuck you too pay me.

Conor McGregor followed up his comments by stating in the interview that he didn’t need the UFC’s involvement in order to promote a boxing match with Floyd Mayweather, and that he would be fine promoting the scrap on his own: “With the Ali Act, I believe I can,” McGregor said. “Especially now that there’s offers on the table. But I think it’s smoother if we’re all involved. I think we’re all about good business. I’ve done great business with the UFC, with Dana (White), with everyone. I think it’s smoother if everyone just gets together and we get it involved. But again, everyone’s got to know their place.

“Everyone’s got to know their place,” McGregor reiterated. “There’s Mayweather Promotions, there’s the UFC, and now the newly formed McGregor Promotions, and we’re all in the mix. So that’s what I’m saying. Nobody is my boss. I know Floyd likes to say Dana (White) is my boss and this and he decides. Hell no. Nobody decides this. If they let people go fight jiu-jitsu tournaments, they can’t stop me going to fight a boxing fight. So obviously it’s smoother to do it all together, but look, everyone’s just got to know their place, and everyone does know their place. Low key, everyone knows their place, so we’ll figure it out.”

Initially, UFC President Dana White responded by stating that if McGregor promoted the match without the UFC, it would be disastrous, however in a recent interview he elaborated on his comments, saying that he hasn’t spoken to McGregor about the matter:

“We haven’t talked since then.”

“You know exactly what was said and done, and it is what it is right now. He came out and said ‘I can do this without them,’ I guarantee you he can’t do it without us, and what I said was ‘I’ve always been respectful of Conor and the things he wants to do and everything else, but if he wants to go down that road it would be an epic fall,’ and everyone knows exactly what that means. I don’t think anything else needs to be said, that’s it.”