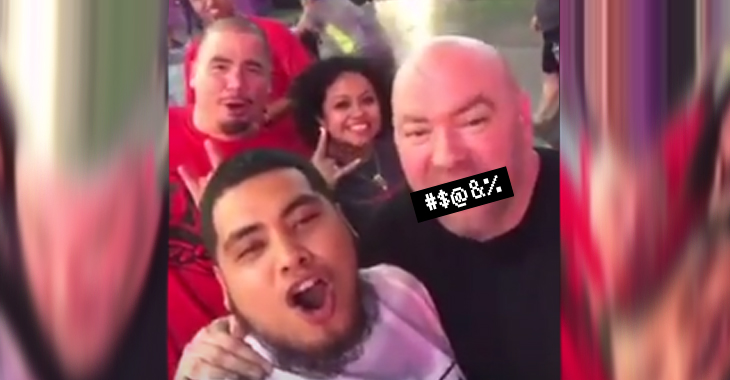 We’re so close now to the biggest fight of the century. Regardless of your opinion on the fight, the fighters, boxing, or MMA, Conor McGregor fighting Floyd Mayweather is gigantic and a ton of fun. Everything feels electric whether you’re in Vegas or not, but those actually in Sin City itself? It has be to absolute chaos. Irish and non-Irish McGregor fans alike have been notorious (pun intended) at every UFC event, now they are unleashed in record numbers. Swarms of hyped, screaming fight fanatics roaming the streets of the city that never sleeps. It looks like Dana White himself has gotten swept up in all the excitement from this fan-shot video.

If you’ve seen his video blog, UFC’s Embedded series, or even just looked at his Twitter feed, you’d be hard-pressed to recall a time when Dana White was this excited. He’s a lifelong boxing fan and the UFC’s biggest superstar is just hours away from stepping into the ring with boxing’s greatest talent of our generation. Seeing him pink-faced screaming the, ahem, catchphrase that has gone viral during the event just shows how hyped he is to be involved in this. Props to him for giving fans the time of day as well.

If you want to see just how widespread this phrase is through the build up, you can see it spray painted on dandelion-dotted hillsides of Ireland, on bumper stickers in Vegas, and in this awesome sketch comedy video of Irish fans using it in everyday conversation.