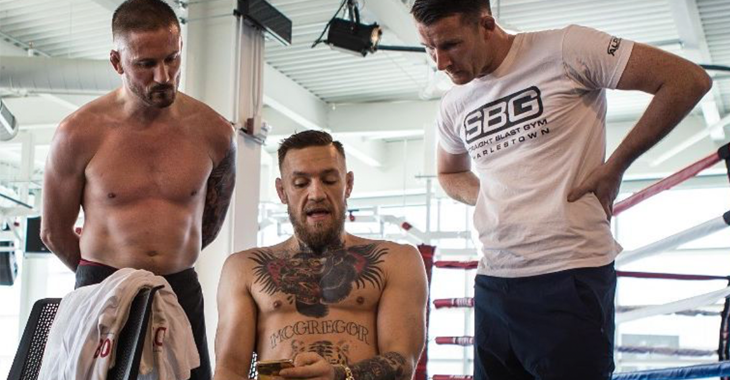 Take it as you may, but whether you like it or not, this isn’t the first time Conor McGregor’s head coach John Kavanagh has mentioned something about a “push” on social media.

On Monday, Kavanagh posted a photo of himself with his back on the canvas wearing boxing gloves as “The Notorious” stood above looking down on the pioneer that helped put Irish MMA on the map. Paulie Malignaggi has been a hot topic of debate in part of the McGregor camp. Malignaggi felt exploited from their sparring session when McGregor’s team released a photo of the former boxing champion getting up off his back from the canvas during a sparring session with McGregor. UFC President Dana White then released footage of the incident where it looked to many as a clean knockdown while others that studied the clip better said it was a pushdown.

Either way, if Kavanagh was truly knocked down by Conor in sparring, he is making it clear with his #notapush hashtag that it was not due to a push.

However, one thing to point out is if the photo and post is a true account of what happened in training, McGregor’s camp is lacking sparring partners. Coach Kavanagh’s training foundation is jiu-jitsu and if he is having to get rounds of sparring in to help prepare McGregor, perhaps Malignaggi was right in saying that they have alienated themselves from getting other boxers to help them prepare for a boxing match with Floyd Mayweather.