In the main event of UFC 205, UFC featherweight champion Conor McGregor will look to make history as the first man to simultaneously hold belts in two weight classes as he steps into the Octagon against UFC lightweight champion Eddie Alvarez. In addition, a win over Alvarez would make McGregor just the third man in UFC history to win championships at two weight classes.

Ahead of the fight, McGregor and Alvarez traded barbs at the UFC 205 pre-fight press conference in New York. During the course of the press conference McGregor was asked about his prediction for the fight. The featherweight champ responded by saying that he would knock Alvarez, who has only been finished once in his 13 year MMA career, out in the very first round.

During a recent appearance on Submission Radio, McGregor’s striking coach, Owen Roddy, gave his prediction for the historic fight:

“I honestly never really change my prediction because I see what Conor does day in, day out in the gym. I see how clean his striking is and I see how powerful he is. And I honestly think Alvarez has been dropped a few times and stuff like that. So I mean, that’s not good knowing when you’re going in to fight Conor McGregor. If you’ve been dropped before and you’re going in fighting Conor McGregor, there’s a very, very high chance that you’re going to be dropped again. Alvarez is a great wrestler, so there will be things we’ll be working on with Conor to make sure that Alvarez can’t keep a hold of him, can’t keep him against the fence, but Conor’s gonna land and I think it’s going to be a matter of time before Alvarez goes to sleep to be totally honest.” 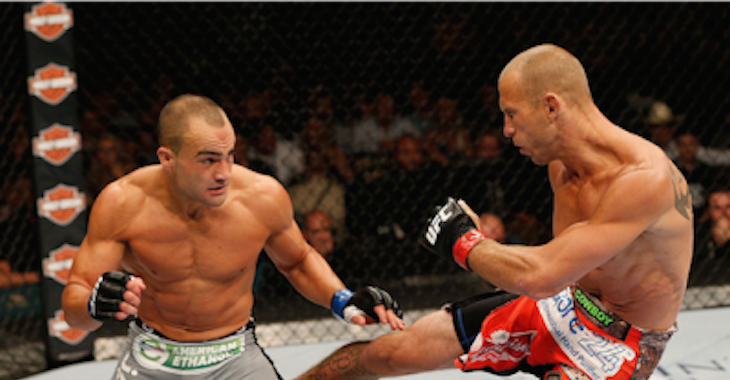 Alvarez, who will be entering the bout on a 3-fight win streak that most recently saw him TKO Rafael dos Anjos to win the UFC lightweight championship back in July, has earned the reputation as being one of the toughest men in MMA.

Will he be able to shock the world and defeat McGregor in New York on November 12th?