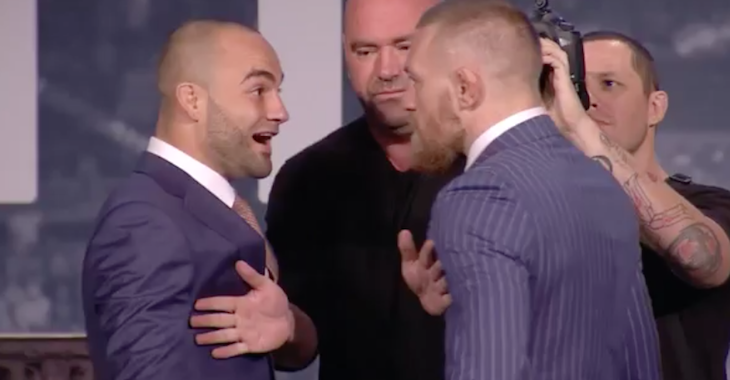 As Eddie Alvarez and Conor McGregor’s anticipated UFC 205 lightweight title fight draws ever closer, both parties continue to dish out the trash talk. On today’s episode of The MMA Hour, Eddie Alvarez plated the latest steaming servings of trash talk, re-upping on his previous claims that McGregor would be the easiest opponent of his UFC career thus far.

When asked by Ariel Helwani why McGregor would be an easier opponent than the Donald Cerrone, Gilbert Melendez, Anthony Pettis, and Rafael Dos Anjos, Alvarez explained that he simply believes McGregor doesn’t possess a well-rounded skill set.

“I think every one of the opponents you mentioned, they have a well-rounded skill set,” Alvarez said. “Even if the fight goes to another realm of MMA, whether it goes from standing up to ground to jiu jitsu, everyone’s tough in each one. They’re well versed to the point where they can hang with some of the toughest guys in the world in any aspect of the sport, and I don’t think [McGregor] can, from what I’ve seen.”

“Not only that, [McGregor’s] conditioning aspect is just not a good level of conditioning,”  Alvarez continued. “The last Nate Diaz fight was a very big eye-opener for me.” Given the flaws he sees in McGregor’s game, Alvarez says he is not remotely intimidated by the Irish superstar.

“I do sincerely feel that [he’ll be my easiest opponent]. Usually when I square off with a man, my heart rate goes up, I feel something. I never felt so unthreatened by a human being as when I was up on stage with him.”

“I’ve never felt so unthreatened by another man.”

Not even McGregor’s quick wit on the microphone fazed Alvarez.

“Not even a little bit,” Alvarez said of his opponents trash talk at the UFC 205 press conference. “I was completely honest with you when I said I enjoyed the press conference. I don’t take anything personal. If you know me as a person, you know even when someone’s trying to be legitimately malicious to me and saying things to me, it’s really hard for me to take things personal from anyone. I just kind of enjoy the show, and I think that’s what I’m going to do November 12. I won’t get to emotional about anything, and the job will get done, and it’ll get done violently and quickly.”

In the past, McGregor has managed to get into many of his opponent’s heads long before the fight even began. Against Alvarez, it appears that Irishman’s infamous mind games won’t be quite as effective.

Who do you think will win Alvarez and McGregor’s looming title fight? Sound off, PENN nation!