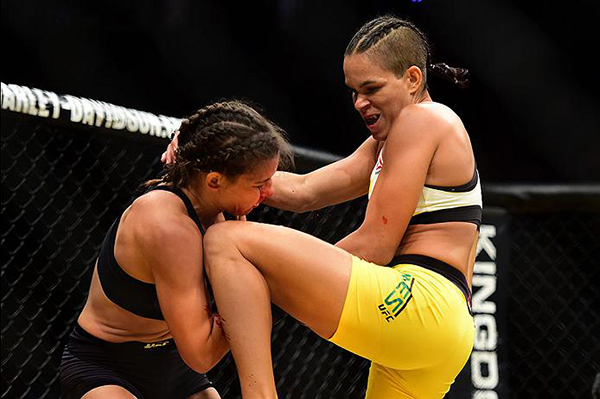 It has now been almost a year since Ronda Rousey relinquished the UFC women’s bantamweight title to Holly Holm, and we haven’t seen her since.

In the year the that Rousey has been away from the cage, the division she once ruled has experienced an incredible amount of movement.

First, Holly Holm surrendered the title to Miesha Tate, succumbing to a fifth-round rear-naked choke. Then, in the main event of UFC 200, Tate passed the title on to Amanda Nunes, wilting under a swarm of first-round punches and tapping to a rear-naked choke. This catches us up to today, when Nunes is awaiting her first challenge as the UFC’s bantamweight queen.

Under normal circumstances, Nunes’ first challenge as champ would probably be provided by Julianna Peña, who recently extended her win-streak to four with a win over former title challenger Cat Zingano. The honor might also be awarded to Valentina Shevchenko, who recently rebounded from a competitive loss to Nunes with a decision defeat of the former champion Holm. Yet the ever-present possibility of a Ronda Rousey return renders the contendership situation at women’s bantamweight entirely abnormal. Were the dominant former champion to return, she’d almost certainly jump the contender line and receive the next shot – at least, that’s what Nunes seems to be hoping.

On Sunday evening, the reigning champ took to Instagram with a gentle call out of Rousey, evidently eager to goad the former champ out of hiding.

At the moment, of course, a Nunes vs. Rousey bout has not yet been made official. The rumors have certainly been swirling to that end, however.

Last month, whispers began to emerge that the two dynamic bantamweights, who have finished a combined 20 fights in the first-round, were being considered as an addition to UFC 207 on December 30. Whether this bout comes to fruition, however, remains to be seen.

Do you think Nunes will get her wish and receive a fight with Ronda Rousey, or should the shot be given to Peña or Shevchenko? Sound off in the comments, PENN nation!