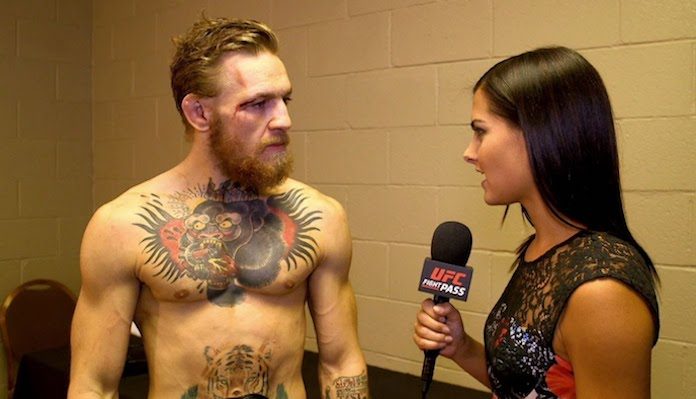 Former two-division UFC champion Conor McGregor has sent Joseph Benavidez a message of support ahead of his title opportunity at UFC Norfolk.

The former two-time flyweight title challenger, Benavidez (28-5 MMA), will square off with Deiveson Figueiredo (17-1 MMA) for the promotions vacant 125-pound title in this evenings main event.

Benavidez will enter tonight’s headliner on a three-fight winning streak, his latest being a TKO victory over Jussier Formiga at June’s event in Minneapolis.

Meanwhile, Figueiredo is currently riding a two-fight win streak, his latest being a submission win over Tim Elliott at October’s UFC event in Tampa.

Earlier this afternoon Conor McGregor took to Twitter where he sent his best wishes to Joseph Benavidez and his wife Megan Olivi ahead of tonight’s coveted matchup.

“Excited for the UFC tonight! Wishing @JoeJitsu and his wife @MeganOlivi a big good luck in their quest at UFC gold tonight! Good luck guys #LetsGoJoe”

Only Joseph Benavidez is eligible to win the flyweight title at tonight’s UFC Norfolk event, this after Deiveson Figueiredo missed the title fight weight by 2.5lbs on Friday.

Obviously Conor McGregor is hoping that “Joe-Jitsu” will emerge victorious in tonight’s main event. The Irishman made his highly anticipated Octagon return at January’s UFC 246 event, where he needed just 40-seconds to put away perennial contender Donald Cerrone in a welterweight contest.

‘Mystic Mac’ is hoping to score a rematch with Khabib Nurmagomedov next, this if the undefeated Russian can emerge victorious against Tony Ferguson at UFC 249 this April.

If that fight does not come to fruition, there are rumors circulating that Conor McGregor could fight perennial lightweight contender Justin Gaethje next.

Who are you picking to win tonight’s UFC Norfolk main event between Joseph Benavidez and Deiveson Figueiredo? Sound off in the comments section PENN Nation!