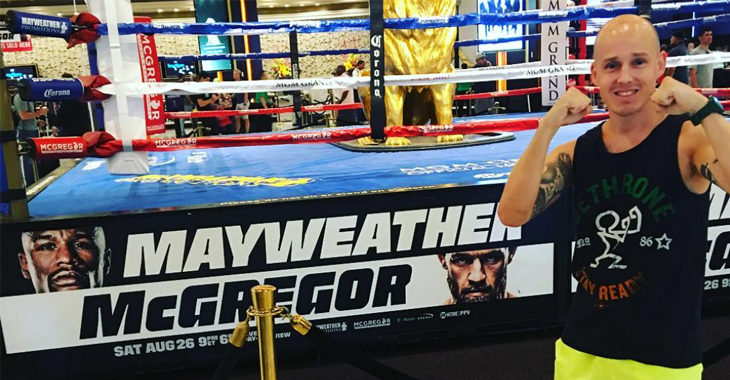 A devoted Conor McGregor fan pulled off his own mission impossible and now has the photos to prove it.

Oliver Regis, a British bartender flew out to Las Vegas, Nevada to watch the highly anticipated money fight between Floyd Mayweather and Conor McGregor. According to The Sun, the British fan bought his $2,500 ticket and made his into the T-Mobile Arena only to find that his seat was near the worst in the house located at the very top.

Somehow, Regis was able to act as if he was a part of Floyd Mayweather’s security team and slipped through front row ticket scanners with the entourage and made his way to the tenth row where he sat in front of Mike Tyson and on the same row as LeBron James. Regis snapped a bunch of selfies with the A-list celebrities who were in some of the best seats in the house.

“I did feel a bit cheeky – but this was a once-in-a-lifetime chance. I could not believe it worked,” Regis told The Sun.

“There were quite a few empty seats.

“I sat down in the third row and Mike Tyson then sat down behind me. LeBron James was on my row and I could see Leonardo DiCaprio.”

Of all those mentioned, perhaps the most intimidating person to get a photo with was former heavyweight champ, Mike Tyson.

“It was quite nerve-racking asking Tyson for a picture. He didn’t say anything – just nodded his head.”

Quite a memory for this Conor McGregor fan. Unfortunately, the fight didn’t go in favor of his fighter but surely this will be a night he will never forget.