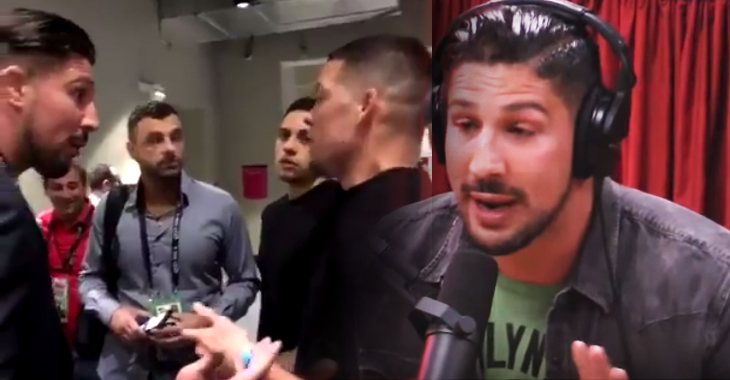 Big fights can turn even the best of friends against each other. Conor McGregor boxing Floyd Mayweather pitted two groups of the most die hard, passionate fans clashing with polar opposite takes. Sure, it’s easy for fans to get heated in debates with each other about scoring, who did what, and the ins-and-outs of a fight we have a lot of emotional stake in, however, even the fighters in attendance and those working the event aren’t immune to these types of altercations. Video has been going around of Brendan Schaub and Nate Diaz in mid-argument over Mayweather vs McGregor, an argument that quickly almost turned into a fight.

Brendan Schaub tried to explain the situation on the Joe Rogan Experience yesterday, to clear up the altercation. What he claims isn’t shown in the video is Schaub telling Nate Diaz that McGregor will fight him next. Instead of talking about that, allegedly Nate Diaz just started insulting Schaub because of everything he said in the build-up to the fight. Then, supposedly the videos above play out after those things were said.

One of the things Schaub didn’t say to Rogan while talking about the situation that you can watch above, is that he brought up McGregor ‘teeing off’ on Diaz in response to Nate telling him that he lacked boxing knowledge. It’s one of those things where if it happened to two of your friends, they’d turn to you and ask you to pick who is right. Either way, it looked like Nate Diaz was ready to fight Schaub after their conversation.