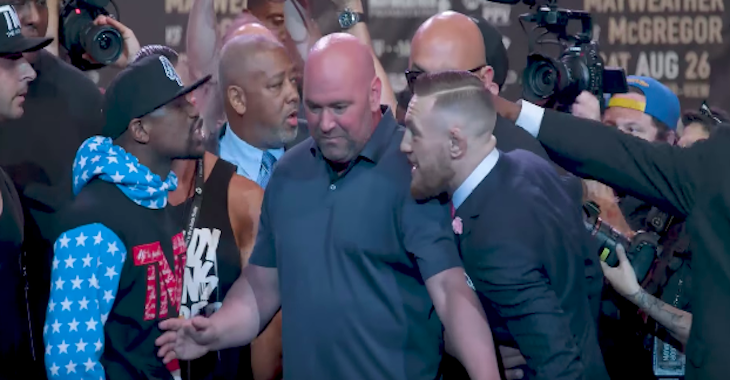 Last night, at a crowded press conference inside the Staples Center in Los Angeles, California, Conor McGregor and Floyd Mayweather met for the first time. It was entertaining affair, highlighted by some memorable trash talk and a fairly intense staredown.

The staredown, of course, would have been much more enjoyable if we could have heard what the two fighters were saying to each other. Luckily, McGregor broke down the exchange in a post-fight chat with Ariel Helwani.

McGregor then commented on how he found the press conference overall. Apparently, it was quite a different experience from what he’s used to.

“I rolled up, and before [it started] Dana [White] went ‘you got a speech? I’ve got a speech,’ and I went, ‘I’ve got no fucking speech.’ But whatever. I just rolled up and started talking shit. Whatever, I had fun. That’s the main thing right.”

McGregor also addressed the controversial moment in which his mic was turned off, depriving him of a valuable chance to fire back at Mayweather.

“They cut my mic as well,” he said. “I don’t give a – they can do what they want, but they ain’t keeping me from him in the ring and that’s it. August 26 they can do nothing to stop me.”

See McGregor’s full chat with Helwani, which covers a range of other topics, below:

Who do you think won the trash talk exchanges at the first of Conor McGregor and Floyd Mayweather’s press conferences?