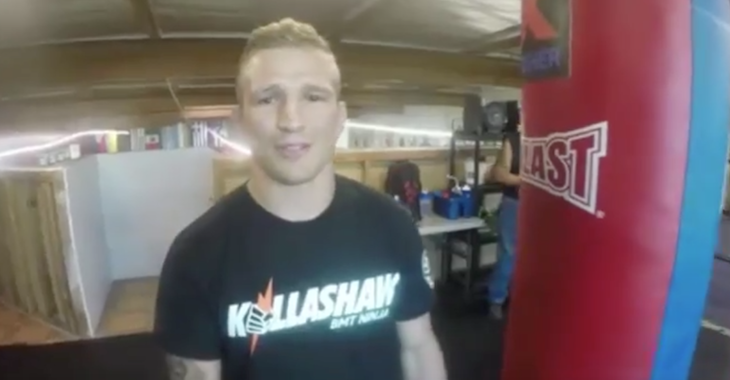 TJ Dillashaw has had some experience in the ring with one of the greats from boxing as we’ve recently seen the footage of the former UFC bantamweight champion sparring with Vasyl Lomachenko.

Lomachenko is one of the boxers that is often talked about in the pound-for-pound debate. Joe Rogan speaks very highly of Lomachenko and considers him “the best boxer on earth.” Given Dillashaw’s experience in the ring with one of the elite boxers of the world, the former UFC champion gave his take on the Floyd Mayweather and Conor McGregor money fight scheduled to take place on August 26 at the T-Mobile Arena in Las Vegas, Nevada.

“I’m predicting that Mayweather is too smart, too defensively smart for McGregor,” said Dillashaw of the matchup.

Dillashaw added that he believes that conditioning will be a factor. We’ve seen moments where McGregor seemed to slow down, especially when the pace was pushed by Nate Diaz in their bouts.

“I don’t think McGregor has the cardio for him, and Mayweather is just going to point fight him and be smart about it,” Dillashaw said.

While McGregor may come into the bout being the slightly taller and longer fighter, “The Notorious” will likely also have a significant weight advantage in the ring come fight night. However, Dillashaw believes that the size advantage for McGregor will not play much into the outcome of the fight due to the distance factor in the boxing match.

“McGregor is a lot bigger than he is, but the distance is different,” said Dillashaw. “I think Mayweather is just too smart.”

Do you agree or disagree with what TJ Dillashaw had to say in regards to Floyd Mayweather vs. Conor McGregor? Let’s discuss this in the comment section!