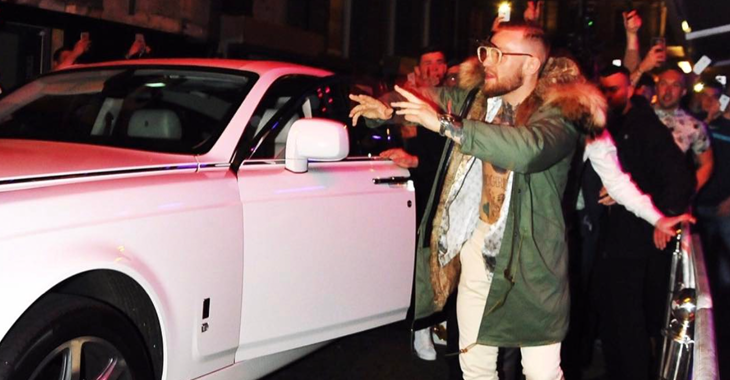 UFC lightweight champion Conor McGregor has been living it up as he has taken time off from fighting in the UFC for the birth of his first child.

“The Notorious” was seen partying it up in Liverpool where he and his friends allegedly went on a five-day partying bender, according to the Irish Sun. The Irish Sun’s report stated that McGregor and his crew of friends started on Sunday at the Grand National and then later checked in at the Hilton Liverpool. The report claims that McGregor hired specialists to clean up the hotel suite after trashing the room where there was believed to be thousands of euros worth of damage, which the report says was caused by McGregor’s friends. A source told the Irish Sun, “There were canisters all over the floor, smashed glass and food lying about.

“They damaged sofas and left cig butts and his Irish flag.”

The source added that “He got people in there to clean because of the level of damage. It’s just been carnage. Just full-on partying.”

The Irish Sun stated in their report that “there is no suggestion McGregor took laughing gas.”

The report also says that McGregor and friends arrived at the race course in white Rolls-Royce cars and McGregor walked away winning 20,000 Euros from the races and then took to the city hitting two nightclubs.

This was the same trip that “The Notorious” posted a photo of himself standing on the hood of a black Rolls-Royce car that got him in some trouble. McGregor apparently checked out of the Hilton on Thursday where he left through a “secret exit” as dozens of fans were waiting outside to get a glimpse of the champ.

What are your thoughts on Conor McGregor’s wild week in Liverpool? Let’s hear it in the comment section!