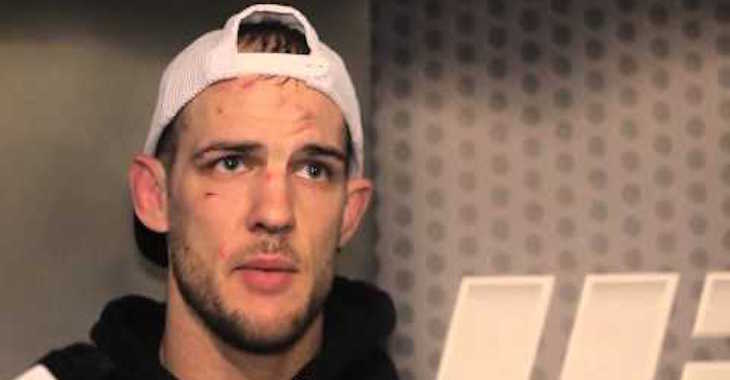 Back in October, UFC featherweight Cole Miller expected to take a flight to Manila to duke it out with Mizuto Hirota. Unfortunately, the organization cancelled this Manila card at the last minute, leaving many of the fighters on the card without their expected paydays. Miller was one of these fighters.

Having undertaken an expensive training camp, Miller approached the UFC about getting more than the small amount of compensation he was offered in the wake of this cancelled card. When they wouldn’t play ball, the disgruntled featherweight aired his grievances in an interview with Sherdog.com.

“[I] drove all night, got into Georgia around four in the morning,” Miller explained in this interview. “Woke up at eight in the morning, was on the way to the airport [to fly to Manila] when I got a text saying the whole event was canceled. I was like, ‘Uh, that sucks,’ You know? And then, got less than a third of my show money so I came out of the training camp I think, nine weeks away from my family, I think I profited four or five hundred dollars.”

Had he been rescheduled to fight at a more immediate card, Miller says this pill would have been easier to swallow. Unfortunately, he was rescheduled for this weekend’s UFC event in Sacramento, a whopping two months later.

Instead of getting rebooked two weeks later, I get rebooked two months later,” he continued in his interview with Sherdog. “So I have to come do another second training camp to get paid for one. So that’s what it feels like. I don’t even want to be [at the gym] right now. It doesn’t make me want to fight harder for my family. It makes me want to fight less. It makes me want to quit. Go get a job at Starbucks or something.”

On Monday’s episode of the MMA Hour, Miller gave an update on his issues with the UFC – Skyping in, coincidentally, from a Starbucks in Sacramento.

“I don’t think that they care,” he said when asked how the UFC reacted to his rant. “When I try to go through the proper professional avenues of reaching out through my manager, they told me that they just weren’t going to take a meeting regarding that issue at that time. Sean Shelby kept saying ‘get this win and renegotiate,’ and none of that makes sense. Why would I want to renegotiate with somebody that doesn’t want to listen to my issues and my grievances?”

“And what does winning one fight have to do with getting paid for a training camp that you already did,” he continued. “That doesn’t make sense.” When he didn’t get the response he wanted from Sean Shelby, Miller says he reached out directly to UFC President Dana White on Twitter. Though White apparently promised him a phone call last Monday, Miller says he never heard from him.

“I reached out to Dana on Twitter, and he said he’d call me on Monday, but he was referring to last Monday.”

Given his gripes with the UFC, and that this fight with Hirota will mark the final fight on his UFC contract, there has been speculation that this might be Miller’s last fight in the Octagon. During his appearance on The MMA Hour, Miller explained that he believes this will be the case.

“It seems like they don’t want me back by just the way that they’re treating me and ignoring me,” he said. “If I win this fight and they send me a contract, I’m not signing that. Why would I wanna sign for you if you clearly didn’t show any interest in me fighting for you? Just take that [contract] back.”

While Miller acknowledged that his long-standing UFC career could be drawing to a close, he couldn’t comment on whether or not that would mean the end of his MMA career as a whole. After back-to-back training camps for a single fight, he says he’s too tired to think about his fighting future at the moment.

“I’m not sure,” he said. “I’m tired. This four-month training camp has been exhausting. I need a break. I’m not gonna say that this is my retirement fight or my last fight, but I don’t wanna fight for awhile.”

What do you think of the UFC’s treatment of Cole Miller? Sound off, PENN Nation!