“Chaos” has won four fights in a row, his latest being a lopsided decision victory over highly regarded Korean fighter Dong Hyun Kim.

Covington is now looking for a big step up in competition as he issued a challenge to recent title challenger Demain Maia.

Sign the contract @demianmaia and I will make up your mind about retirement, unlike that bitch @TWooodley could do. @ufc @danawhite pic.twitter.com/RtsA6PV3v1

Demian Maia was last seen in action at July’s UFC 214 event in Anaheim, where he suffered a unanimous decision loss to current welterweight kingpin Tyron Woodley.

“The Chosen One” was able to stuff all twenty-one of the Brazilian submission specialists takedown attempts and left Maia with a pair of badly swollen eyes.

With that said, Covington was obviously not impressed with Woodley’s performance against Maia at UFC 214, and is now vowing to retire Maia if given the opportunity for a fight.

Prior to being outclassed by Tyron Woodley, Maia had put together an amazing seven-fight win streak which included submission victories over Neil Magny, Matt Brown and former interim title holder Carlos Condit. 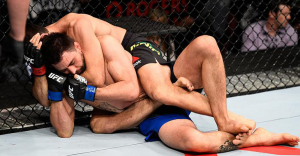 Would you like to see Colby Convington be the next man to challenge Demian Maia?

If not, who would you like to see the Brazilian submission specialist scrap next?