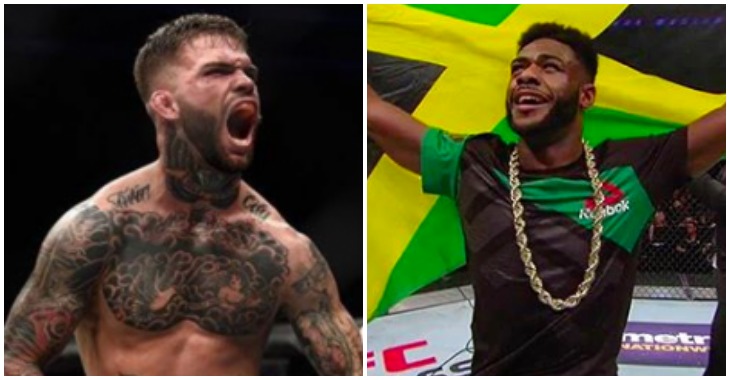 Earlier this month, UFC bantamweight champ Cody Garbrandt and bantamweight contender Aljamain Sterling got into it on Twitter. This beef started innocently enough, but blew up when Garbrandt called Sterling “boy,” a comment that was immediately criticized for it’s racial undertone.

On Monday’s edition of The MMA Hour, Garbrandt explained where his beef with Sterling began,

“I don’t like that guy,” Garbrandt said (h/t Peter Carroll of MMAFighting.com).

“He got all mad because over a year ago I told him that he was overrated. So the guy starts running his mouth and I see a TMZ report that he said he was going to kill me. So I was like, ‘Oh you’re going to kill me?’

“So I took a screen shot and I sent it to him in a DM and he acted like a little bitch and that’s what he is.”

Garbrandt also addressed his “boy” comment, assuring he didn’t realize the negative connotation of it, and admitting that another word might have been better.

“I am not in the least bit racist. I have a sister that’s married to a black guy. I have a niece that is a mixed (race) child.”

Though this exchange is now in the rear-view, Garbrandt said that he will not hold back if sees Sterling in person.

“For him to go out there and try to ride off that fame, I told that fool that the next time I see him I’m going to f*ck him up,” Garbrandt said.

“Next time I see him he better have his hands up.”

Who do you think wins a fight between Cody Garbrandt and Aljamain Sterling?