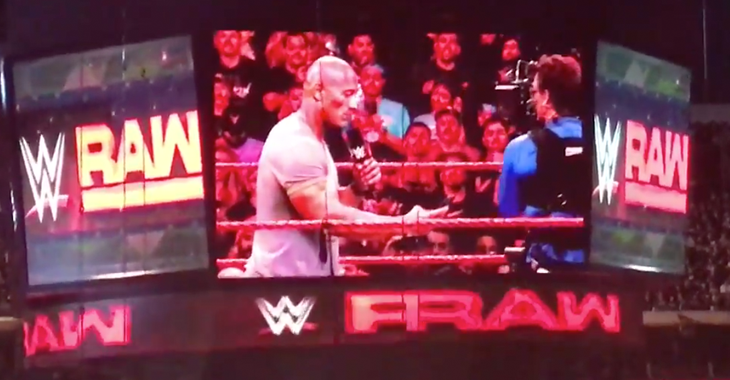 If CM Punk doesn’t find himself fighting in the UFC Octagon ever again, it sounds like the fans in the WWE would like nothing more than to welcome him back to the professional wrestling ring.

Former WWE champion Dwayne “The Rock” Johnson entered the WWE ring after Monday Night Raw was recorded at the Staples Center in Los Angeles, California. According to Heavy.com, The Rock was in the ring to film a scene for the Fighting With My Family movie that he is producing, which features the Saraya-Jade Bevis, better known as the professional wrestler, Paige. During the filming of the scene, Paige and AJ Lee, who is married to CM Punk put on a match for the filming of the movie. When Lee’s name was mentioned, the crowd started to chant Punk’s name.

The Rock then went on to try and get a hold of Punk on the phone but unfortunately for the fans, Punk did not answer. The Rock did leave a voicemail though.

“Hey Punk, it’s Rock,” Johnson said. “This is not a joke. I’m literally calling you from the middle of the Staples Center. I hope you can hear this. Again, it’s not a rib. They are chanting your name.”

CM Punk later acknowledged the repsonse from the crowd on twitter.

Punk tweeted that he was walking his dog, Larry and gave his thanks to the Los Angeles crowd chanting his name.

I'm walking Larry. It's his birthday.

Thanks Los Angeles. Nice to hear from you. @STAPLESCenter

Could this spark CM Punk to jump back in the WWE ring and steer him away from his passion of competing in mixed martial arts? Where would you rather see CM Punk? Let’s get your opinion in the comment section!