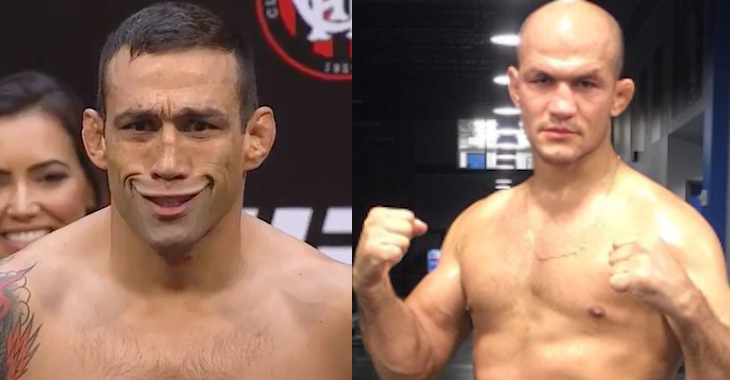 Fabricio Werdum is working diligently on getting the UFC heavyweight title back in his hands.

Werdum, who is ranked #1 in the UFC heavyweight rankings will likely be taking on #5 UFC ranked heavyweight Ben Rothwell at UFC 211 in Dallas, Texas on May 13. Werdum feels that with a win over Rothwell, the only bout that makes sense for him is a fight for the title. “Ben Rothwell is a dangerous guy,” Werdum recently told Portal do Vale Tudo (translated by Bloody Elbow). “He has wins over Barnett and Overeem, he’s dangerous because he’s big. He’s a strong fat guy, so I need to fight a strategic, intelligent fight. We have to put on a show, but sometimes the styles don’t match so you have to know how to use strategy. Winning is what matters, having my arm raised. Should I win this fight, I don’t see anyone else to fight for the title but me.”

With Stipe Miocic defending the heavyweight title against Junior dos Santos in the main event of UFC 211, Werdum owns losses to both men and is ready to get a rematch with whoever is holding the belt after their fight comes to an end. “I have no preferences,” Werdum said. “I lost to both guys and I’d like to pay them back. Be it Miocic or Dos Santos, my goal is the belt, no matter who has it. If it’s Cigano, though, it’ll be good to stop him from being the Brazilian Conor McGregor. The way he’s been talking lately is not cool, it doesn’t match him. I don’t know him, but this whole Brazilian McGregor thing doesn’t suit him. It’s actually ridiculous, to be honest.”

Will Fabricio Werdum get past Ben Rothwell and fight for the title next? Let’s hear your thoughts on the heavyweight title picture in the comment section!