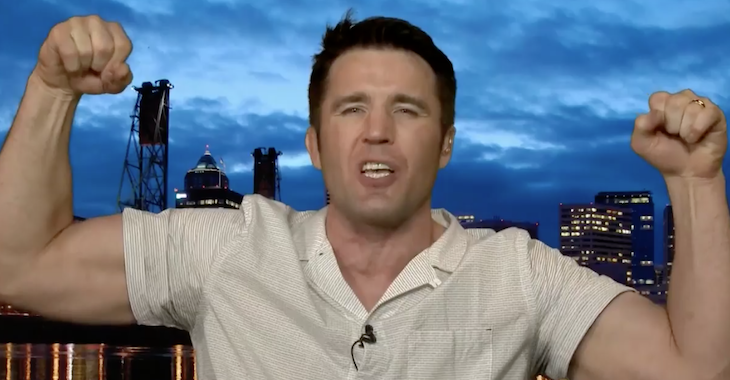 UFC featherweight champion Conor McGregor has undoubtably become one of the biggest figures in the MMA world, if not the single biggest. McGregor brash persona parallels the likes of Boxing legend Muhammad Ali, who used to frequently talk trash to his opponents in an extremely elaborate way, while promoting himself with over-the-top speeches.

Before McGregor burst onto the UFC scene in 2013 when he fought Marcus Brimage, UFC fans had their eyes and ears tuned in to former middleweight title challenger Chael Sonnen, who is known as one of the greatest trash talkers in the history of MMA.

Sonnen, who arguably delivered some of his greatest trash talk before, and after, his iconic first fight with Anderson Silva in 2010 at UFC 117, recently announced his return to MMA after his 2-year suspension ended earlier this summer. ‘The American Gangster’ signed with Bellator MMA, and will reportedly face Tito Ortiz in his first Bellator MMA fight.

Ahead of Conor McGregor’s UFC 205 scrap with Eddie Alvarez for the UFC lightweight title on November 12th in New York, Sonnen spoke on SiriusXM Rush with Brian Stann, where he was asked to give a piece of advice to Conor McGregor. “Conor’s gotta put somebody over, and he can pick a guy and it can be from a different generation, it can be from right now, it could be a different weight class, it could be his weight class, but he has to put somebody over. Psychologically, when you’re telling the fans ‘I’m the greatest, I’m the greatest,’ and everybody else sucks, at some point you’re going to lose them. He just needs to pick a guy, grab Carlos Condit, just somebody random, again it doesn’t even have to be somebody he could ever match up with, and then admit, ‘I admire that guy,'”

“When you’re tasked with as much media as he is, and I used to have to be in that seat, all of a sudden you’re coming in and it’s gimmicky. I was doing poems at some points, it was fun, they were getting great clicks, people cared about them. But at the same time, it’s not organic. It’s scripted and it’s not real. If Conor wants to keep the audience, psychologically, he’s got at some point to level with them. There’s really nothing more endearing for Conor, as a fan, than when Diaz kicked his ass, and Conor immediately went to the press conference all banged up, beat up, tipped his hand to Diaz, did interviews, said ‘this one is really tough. He hurt me, he surprised me, he got me exhausted.’ When he came out and he was really real, Once you get them in then you can always go back to the character, but he’s gotta put someone over.”