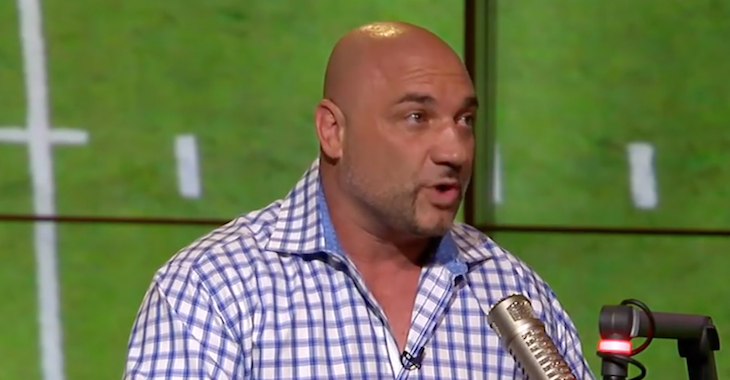 Recently, it was revealed that former NFL standout Greg Hardy was looking to make the transition to MMA. While there was no word given on when Hardy planned to make his MMA debut, or which promotion he would be doing so with, all signs pointed to the former Pro Bowl player making the jump to MMA.

That didn’t sit well with Fox Sports analyst Jay Glazer, who owns and runs the Unbreakable Performance Center in California, who spoke on The Rich Eisen Show, where he pleaded with MMA gyms to refuse to train Hardy over his previous domestic violence case. “I just think, first of all, the guy feels absolutely no remorse whatsoever and people are going, ‘Oh, well don’t you believe in second chances?’ What second chance? He’s not asking – there’s been no remorse,” Glazer said. “I love this sport. It’s a beautiful sport where you learn all these different arts. Someone like this does not deserve the privilege to do that. So yes, I’m calling on every other coach out there to not train this dude. He does not deserve it, he doesen’t deserve to be allowed to be around us, it’s not what we stand for.

“And I know people go, ‘Well, there’s a problem with domestic violence in MMA.’ There are individuals there who do that in our sport, too, and I don’t think they should be in our sport, either. That’s the bottom line. If you are violent with a woman, you play a violent sport, your privilege should be stripped of you. That is it. This guy shouldn’t be allowed in it. He tarnishes what I think is one of the greatest sports on the planet.”

“It’s pretty cut and dried, here,” Glazer said. “And I asked all my fellow MMA coaches not to give this guy a chance because he doesn’t deserve it. It’s a privilege to play this sport or play football, and we here at Unbreakable Performance, and I know other places I’ve worked, we actually train women to defend themselves against people like Greg Hardy and with threats to violence.

“I’m not on my high horse here. It’s an art. It’s martial arts. It’s the art of self defense, is how it started – not so you could use it to be more aggressive and more violent.”

Hardy was arrested for assaulting his ex-girlfriend in May of 2014 after allegedly grabbing the woman, throwing her into furniture, strangling her, and threatening to kill her. While a judge initially found Hardy guilty, the victim no-showed Hardy’s appeal, which was set to be a trial-by-jury rather than a bench trial. Due to the victim never appearing, the charges against Hardy were dropped, although in 2015, photos emerged of the victim’s injuries.