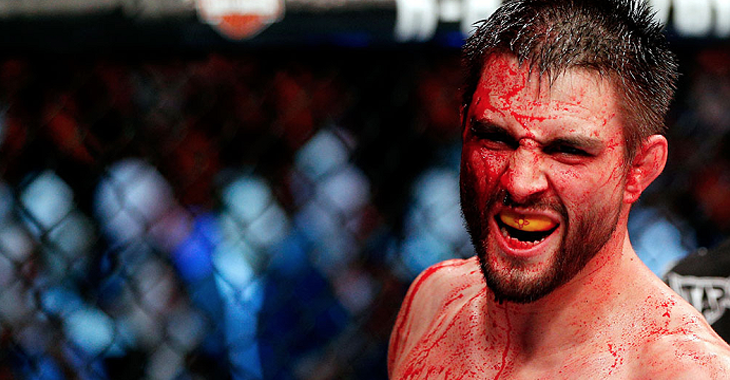 If things had gone according to the initial plan, former UFC interim welterweight champion Carlos Condit would have battled Matt Brown in the co-main event of the UFC’s April 14 trip to Glendale, AZ. Regrettably, Brown was forced out of the fight with an ACL tear, leaving Condit without an opponent.

“Wish it was all April Fools but I did tear my ACL over the weekend,” Brown said in a statement on Twitter. “I hope [Carlos Condit] gets an opponent and doesn’t have to lose out on the opportunity. We’ll do it for sure when I’m back.”

“No need to send me a message with ‘I’m sorry,’” he added in a subsequent Tweet. “This is hardly something to be sorry about, I still live a great life and am blessed to be doing what I do daily. These kinds of obstacles are to be expected along this road. I will get past it and ultimately benefit from it somehow.”

The good news is that the UFC has already found a replacement opponent for Condit. Days after Brown’s removal from the fight, Brazil’s Alex “Cowboy” Oliveira has agreed to step in and battle “The Natural Born Killer.”

This news was first reported by Combate. When we last saw Oliveira in action, he came up short in a 2017 Fight of the Year frontrunner, losing by third-round TKO to Yancy Medeiros. This loss was preceded by five-straight wins. He’s 18-4-1 overall.

Carlos Condit, meanwhile, last fought in December, when he gave up a decision to Neil Magny in his long awaited return to the cage. In his next most recent bouts, he succumbed to a Demian Maia submission, and gave up a ridiculously close decision to then champion Robbie Lawler. His last win occurred in May of 2015, when he defeated Thiago Alves by TKO. Condit is 30-11 overall.