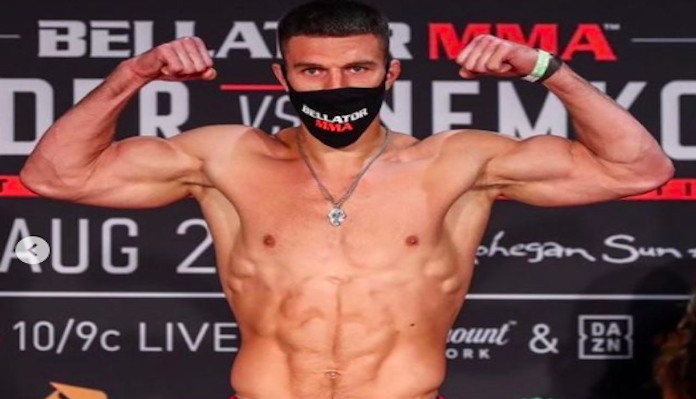 Bellator announced on Tuesday that the promotion has a new home in 2021 as it will be moving to the Showtime television network going forward. To kick off the new partnership, the organization will hold its 205lbs tournament starting off in April. There are eight talented fighters in the tournament, including former UFC champions, and any of them could theoretically win. But according to the bookies, the champion Nemkov has a slight leg up on the competition.

Take a look at the betting odds to win the Bellator Light Heavyweight World Grand Prix (via BetOnline/Aaron Bronsteter).

Nemkov (12-2) won the Bellator light heavyweight title in his last fight when he knocked out former champion Ryan Bader in a standout performance. Overall, Nemkov has won seven straight fights including all five of his fights in the Bellator cage. Since joining the promotion in 2017, Nemkov has defeated Bader, Rafael Carvalho, Phil Davis, Liam McGeary, and Philipe Lins. The oddsmakers have Nemkov listed as the favorite to win the tournament at +180 odds. In his first quarterfinal bout, Nemkov faces off against Davis in a rematch. The bookies also don’t give Davis much of a chance in this tournament at +1600 odds.

As for Bader, the former champ, he’s a +550 underdog to win back his belt and make another successful tournament run in Bellator. Both Yoel Romero and Anthony Johnson, who are +400 and +700 underdogs, are also live dogs to win this whole tournament. Both men were fighting for titles in the UFC before joining Bellator, so their run through the bracket should be interesting to watch.

Who is your money on to win the Bellator Light Heavyweight World Grand Prix?