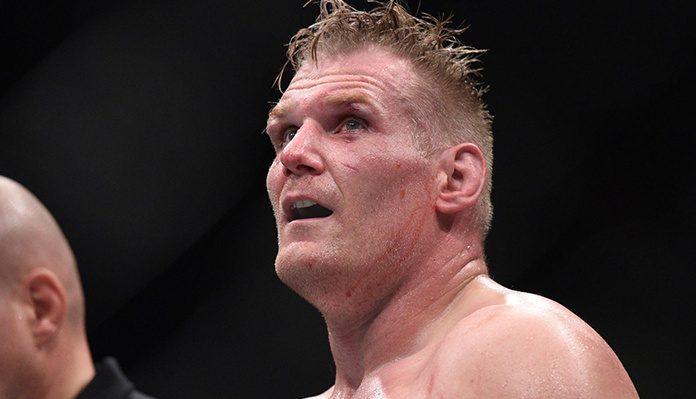 Bellator heavyweight Ronny Markes is looking to fight Josh Barnett at Bellator 238 next month after their Bellator Salute The Troops fight was canceled.

Barnett fell ill and was forced to be removed from the card just hours before he was set to fight Markes in the main event of Bellator Salute The Troops. Barnett later posted a video statement where he explained why he couldn’t fight and how disappointed he was to let down the troops and the fans.

In response, Markes spoke to MMAFighting.com’s Guilherme Cruz about his side of the incident. Here’s what Markes said about how he found out about the fight being canceled.

“I was shadow boxing in the locker room when Mike Kogan came in to talk to Ray Sefo. I asked Ray what happened, and he said the fight was canceled because Josh wasn’t feeling well. I thought to myself, ‘I can’t believe this is happening.’ I was getting ready to warm up, getting ready to fight, but I think God has a better plan for all of us,” Markes said.

Markes says that he then went to speak to Barnett in his opponent’s locker room.

“I went to (Barnett’s) locker room and asked him to try to make this happen in California, and he said he’s down for it. I have faith that it will happen on Jan. 25. We have five weeks to train, and I believe he will be better in three days. That’s the fight that makes the most sense and I think he will accept it,” Markes said.

“I spoke with Scott (Coker) and he said that’s a possibility, that he would talk to Josh first and see if he’s okay with it, and also hope he doesn’t have any pro wrestling show lined up. If he doesn’t want to fight me in California, but do it on a later card, I still want to fight on that show so I can stay active. I wanna fight Josh no matter how. He said no one wanted too fight him, and that’s what I’m here for.”

This fight was supposed to mark the Bellator debut for both Markes and Barnett. Unfortunately, the fight just wasn’t meant to be and it didn’t happen. But as long as both men get ready in time for January, a re-booking makes a lot of sense.

Do you think Bellator should re-book Ronny Markes vs. Josh Barnett or move on and book another fight instead?