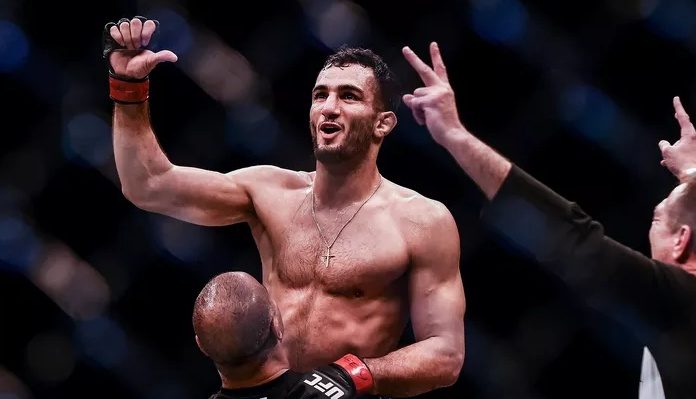 Both men came into the fight riding waves of momentum. The champion Gegard Mousasi (49-7-2) was coming off a third-round TKO of John Salter in August 2021. He won the belt for the second time in October 2020, by outpointing former welterweight champion Douglas Lima.

Austin Vanderford (11-1) on the other hand, came into the fight with an undefeated record. He earned his title shot by defeating Fabian Edwards in May 2021 via unanimous decision. The win was his fifth straight under the Bellator banner. In addition to being known for his violence inside the cage, he’s in a highly-publicized relationship with superstar Paige Vanzant.

The fight itself wasn’t even close. Vanderford came out early trying to implement his grappling game plan, but it showed early that it wasn’t going to work. Just over a minute into the bout, the challenger shot for a takedown that was stuffed. Gegard Mousasi then reversed position and began raining down elbows. A few shots later, and the champion had defended his crown.

Check out how the pros reacted to Gegard Mousasi decimating Austin Vanderford below:

@mousasi_mma is the most underrated fighter in MMA today.
Congratulations Gegard #Bellator275

What do you make of Gegard Mousasi defeating Austin Vanderford in the Bellator 275 main event? Who would you like to see the champion fight in his next outing? Where do you think he ranks all-time at 185-pounds? Sound off in the comment section, PENN Nation!