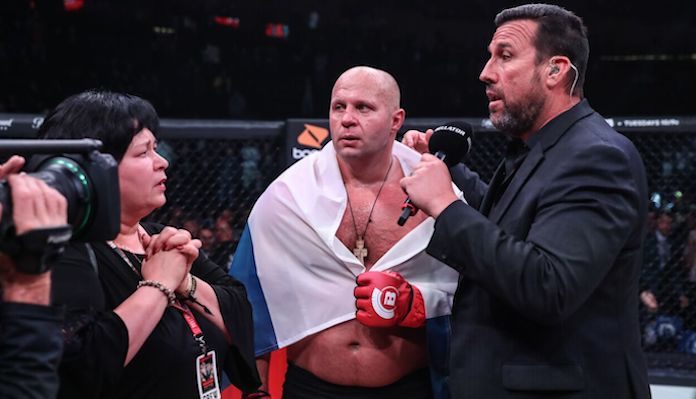 ‘The Last Emperor’ entered tonight’s contest looking to rebound, this after suffering a first round knockout loss to Ryan Bader in his most previous effort at Bellator 214.

Prior to the setback, Fedor was coming off back-to-back TKO victories over former UFC standouts Frank Mir and Chael Sonnen respectively.

Meanwhile, Quinton Jackson was returning for the first time since September of 2018, where he scored a TKO victory over bitter rival Wanderlei Silva.

‘Rampage’ entered tonight’s contest having gone 3-2 over his past five fights overall.

Tonight’s Bellator Japan headliner proved to be a one sided affair. ‘Rampage’ looked to be very out of shape, where Fedor seemingly appeared to be in great form. ‘The Last Emperor’ was on the attack early and often in tonight’s fight unloading right hands and uppercuts in the direction of ‘Rampage’. After getting out of the way of an initial flurry, Jackson was put down by a right hand from Fedor (watch that here).

Check out how the pros reacted to tonight’s Bellator Japan main event below:

Was just me or Rampage looked really bad tonight? #BellatorMMAJapan

Man, Fedor. Why was Rampage shaking his head? Did he think he was still on his feet? Man, sucks to see him get Ko’d #BellatorJapan

Congratulations Mr Fedor ! You are the greatest of all time . Retire in peace my friend. #BellatorJapan #MMA https://t.co/fgyctTzdcE

What do you think of Fedor Emelianenko possibly retiring following his KO victory over Rampage Jackson at tonight’s Bellator 237 event? Sound off in the comments section PENN Nation!