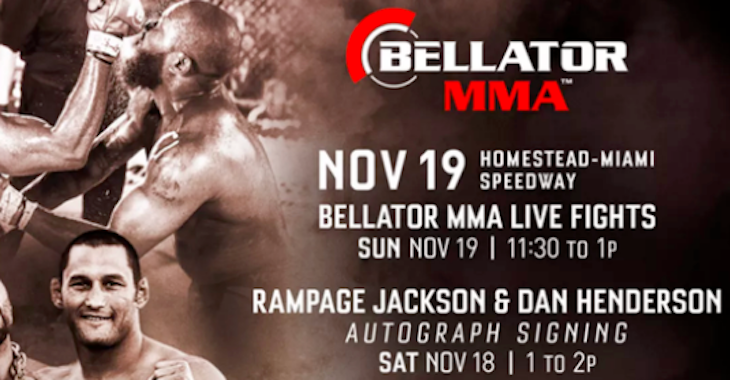 Over the weekend, Bellator MMA set up shop at the Homestead-Miami Speedway in Homestead, Florida, as part of the festivities for the 2017 Monster Energy NASCAR Cup Series Playoffs. The promotion hosted a series of free fights for the race fans in attendance, and also offered meet-and-greets with MMA legends like Quinton “Rampage” Jackson and Dan Henderson.

While this was an interesting bit of co-promotion on Bellator’s behalf, not everyone involved was happy with the way it all went down. Mitchell Chamale, one of the fighters on the bill, had a pretty fair complaint about the way he and his fellow fighters were treated backstage.

In a post to Facebook, Chamale shared a photo of several fighters sitting on flattened out cardboard backstage. According to him, Bellator failed to provide mats on which the fighters could warm up – hence the cardboard.

“Fight for Bellator they said… with all the production equipment they travelled with, they could have thrown ins couple mats,” Chamale said in his post. “The state wants the fighters to carry themselves as professionals, but don’t require promotions to treat them like professionals. I️t has to work both ways.”

When fighters grow unhappy with the state of things in the UFC, Bellator is often discussed as a healthy and viable alternative. Apparently, however, the Viacom-owned promotion has some kinks of its own to work out.

What do you make this backstage set-up for the fighters at the Homestead-Miami Speedway? Join the debate in the comments section!