This according to ESPN‘s Ariel Helwani, who recently shared the report on social media.

The bout will serve as a rematch, as Cro Cop and Nelson first met back at UFC 137 in October of 2011, with “Big Country” emerging victorious by way of third-round TKO.

Mirko Cro Cop and Roy Nelson were initially slated to rematch at Bellator 200, but that proposed contest failed to come to fruition.

The veteran heavyweights will now meet at Bellator 217, which takes place February 16 live from the Mohegan Sun in Uncasville, Connecticut.

Mirko Cro Cop will enter the fight on a nine-fight win streak, his latest being a first-round stoppage victory over Roque Martinez at RIZIN 13.

The 44-year-olds last loss came back in November of 2013, when he was submitted by now-perennial UFC heavyweight contender Oleksiy Oliynyk. 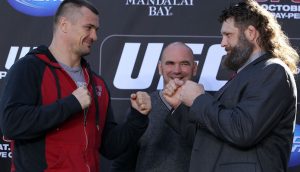 Meanwhile, Roy Nelson will enter his rematch with Cro Cop looking to rebound after losing his past two fights. In his most recent appearance at Bellator 207, Nelson suffered a first-round knockout loss to Sergei Kharitonov.

Also featured on the card is a heavyweight title eliminator bout between Vitaly Minakov and Cheick Kongo.

Who do you think will emerge victorious when Mirko Cro Cop and Roy Nelson square off for a second time at Bellator 217? Sound off in the comments section PENN Nation!