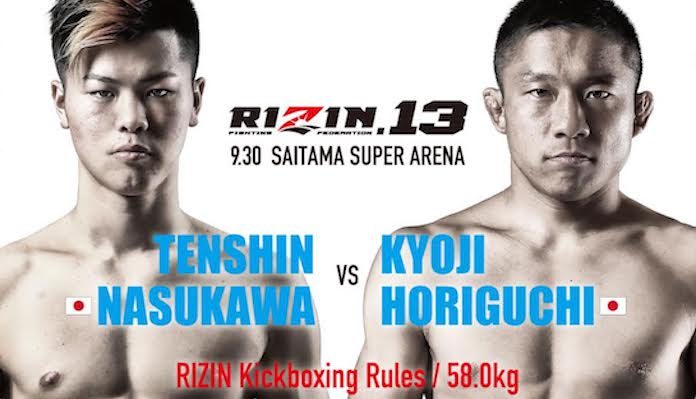 Early on Friday morning, Rizin Fighting Federation announced the lineup for Rizin 13, which goes down on September 30 inside the hallowed Saitama Super Arena outside Tokyo, Japan. To call the card stacked would be an understatement.

“I am very excited to be able to finally announce this,” Horiguchi said of this massive Rizin 13 main event. “Details on the rules aren’t set yet, but I would like to fight him under interesting rules like 1 round [of] 15 minutes.”

“I am excited to be able to announce a fight that the world will be interested in,” Nasukawa said, echoing his foe’s sentiment. “He is a fighter that I respect and have looked up to. But I will make sure to knock him out.”

This stacked Rizin 13 card will also feature the return of heavyweight MMA legend Mirko Cro Cop, who will take on Roque Martinez.

“I am happy to be able to announce that I will be fighting on September 30th at the
Saitama Super Arena against Roque Martinez,” Cro Cop said of this bout. “I had a very bad injury four months ago but all of that is behind me. Please come to Saitama to watch my fight, and enjoy the show.”

Elsewhere on this stacked card, we’ll witness appearances from UFC veterans Daron Cruickshank and Diego Brandao (who fight each other), and a number of other compelling bouts.

Here’s the full Rizin 13 fight card as it currently stands.

What do you think of the lineup for Rizin 13? Who do you think will come out on top in the Kyoji Horiguchi vs. Tenshin Nasukawa kickboxing main event?