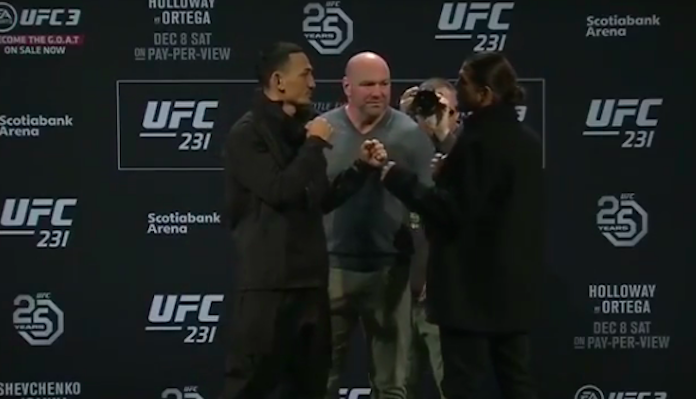 Max Holloway and Brian Ortega are two of the most dangerous and versatile young fighters in MMA, and this Saturday, in the main event of UFC 231, they’ll fight.

Heading into this fight, which will see Holloway attempt to defend his featherweight title against Ortega, fans are divided in their predictions.

Whatever the outcome of this UFC 231 title fight, many members of the MMA community  feel that Holloway and Ortega are likely to meet several times over the course of their careers. After all, both are still quite young at 27 years old apiece.

Max Holloway and Brian Ortega recognize this possibility themselves.

“Yeah, he ain’t going nowhere and neither am I and there’s no more room at the top,” Ortega said of Holloway at the UFC 231 pre-fight press conference this week (transcript via MMANytt). “Like I said, no matter what happens I don’t see him going down and spiralling down in a crazy thing, neither do I see myself.

“Whatever happens, we’re going to fall down, get back up and then challenge each other again. So this is the beginning.”

Max Holloway agreed with this comment from Brian Ortega — though he added that their future fights might well occur at a heavier weight class.

“Me and him are the same age,” the champion said of his UFC 231 opponent. “We’ll probably run into each other a couple different weight classes, who knows.

“Our backgrounds, Hawaiian and Mexican, we love food so you might see us fighting for the daddest man on the planet [belt] one time so who knows.”