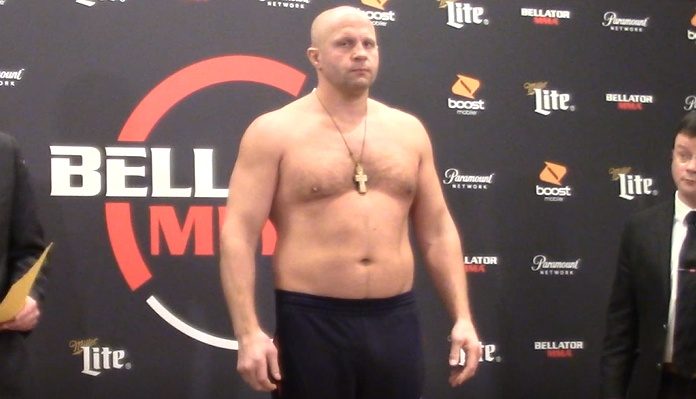 Fedor Emelianenko headlines the first Bellator event in Moscow, boasting that “the Russian fans are excited for Bellator to come to Russia.”

It was revealed earlier this week that the legendary MMA heavyweight would be returning to the Bellator cage this fall, and now we have a date and location for the fight. On Friday, Bellator officially announced its inaugural event in Russia. The card takes place on October 23 in Moscow, Russia, and Emelianenko will be the headliner of the event, though his opponent has yet to be determined. The event will take place at the VTB Arena.

“The Russian fans are excited for Bellator to come to Russia. We have a lot of fans worldwide and they are excited. The fighters are excited to show their skills in a Russian arena,” Emelianenko said (h/t MMA Mania).

As noted, this will be Bellator’s first event in Russia, and likely the first of many. There are a number of other Russian fighters in the promotion that hail from the country, so going there seems like a good move for Bellator as it looks to put together a stacked card.

As far as the opponent for Emelianenko goes, that’s still not a done deal. According to Bellator president Scott Coker, Bellator is still finalizing details of Emelianenko’s next foe.

“We are in the process of working out the opponent still. We have had a lot of offers, a lot of names that have popped up as you can imagine. We still have to talk about it and that is the one thing we will figure out,” Coker said. “As far as the Moscow date, it’s a big moment in the company and a big personal goal of mine. And doing it with Fedor, it is going to be an exciting night.”

Who do you want to see Fedor Emelianenko fight at this Bellator event in Russia?